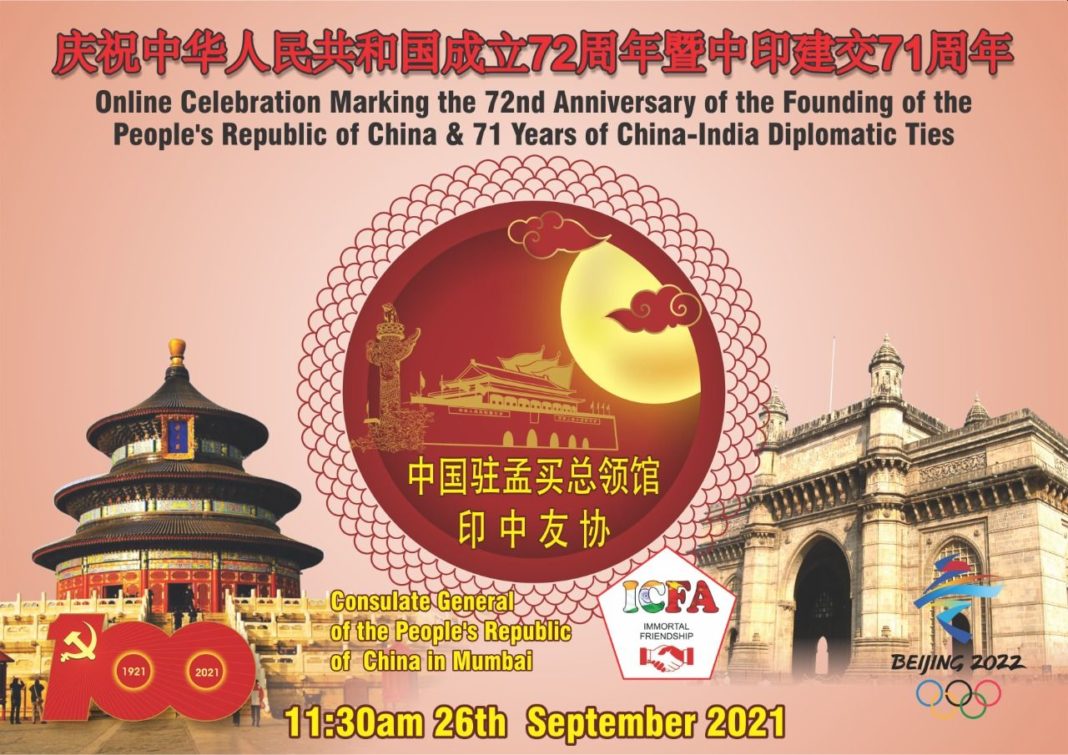 A video recording of this event can be viewed at https://youtu.be/R1G7lLBvFf4

Today with ICFA [India-China Friendship Association], we are honored and delighted to join all of you to celebrate the the 72nd anniversary of the founding of the People’s Republic of China, which falls on October 1. This year also marks the 71st anniversary of China-India diplomatic ties as well as the 100th anniversary of the founding of the Communist Party of China.  Compared with the raging scenario of COVID-19 last year, now we are seeing the light at the end of the tunnel. Recently, we celebrated subsequently the Mid-Autumn Festival in China and Ganesh Festival in India, similar manifestations of our great cultures. Yangzhou is actually China’s Shanghai in the 18th Century. Solapur is the hometown of our great friend Dr. Kotnis. My special thanks to WCCO — World Historic and Cultural Canal Cities Cooperation Organization in Yangzhou — the Royal Opera House, Mumbai, the Confucius Institute at Mumbai University, the Musician Federation of India and of course ICFA for their hearty performances.

We have good reasons to celebrate and reflect. Today, I’d like to share with you the 3 magic facts of modern China, 3 historic perspectives of China-India relations and some future prospects. In short, the Chinese miracles are economic developments, social harmony and political stability. China’s reform and opening up contributed a great deal to its sustained growth and the world economy. China is now the world’s second largest economy, largest manufacturing hub as well as trading center. More importantly perhaps, China has eliminated absolute poverty across the country, contributing to more than 70% of global poverty reduction, and built a moderately well-off society, now moving towards common prosperity.

Socially, like India and other ancient civilizations, China advocates the unity of man and nature. With the world’s largest population, China is the first country to control COVID-19 and has provided nearly 1.2 billion doses of vaccine and large-scale medical supplies to over 100 countries, making the single greatest contribution to the global fight against the epidemic. China has all along supported  science-based virus origins-tracing efforts. As the saying goes, let science be science and stay away from “political virus” .

Not long ago, we solemnly celebrated the 100th anniversary of the founding of the Communist Party of China. From 13 people to 95 million members and from a small boat to a big ruling party, no wonder people call the CPC the most successful “start-up team”. The key to its success, as President Xi Jinping has repeatedly emphasized, lies in the firm belief that “the country is the people and the people are the country”.

Ladies and Gentlemen, historically, China and India have been paralleling with each other. If we look at our 70 some years of republic history, China and India have successfully yielded the Five Principles of Peaceful Coexistence but still face colonial hangovers on the other hand. Lack of in-depth understanding hold back bilateral relations, to some media understanding remains in the colonial era . At present, we have similar challenges, such as fighting the epidemic, climate change and rejuvenating the nation. Only with deeper understanding can we seek common ground while shelving differences and embrace the future. 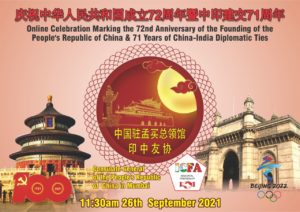 If we look at the hundreds of years of colonial history, like two brothers in difficulty, China and India emerged from colonial and semi-colonial ruins and achieved national independence by unremitting struggle. Dr. Kotnis is the pride of both India and China. He is a great internationalist walking in the right historical direction. To carry forward the spirit of Dr. Kotnis, we must follow the trend of the times and pursue true multilateralism, instead of following western hegemony or certain closed small circles.

Further, when we look at the 1000 years civilizational history, with Hsuan-tsang and Bodhidharma and many other pioneers, the Chinese and Indian people have always been close at heart. The soil and water characterize the people. Linked by mountains and rivers, China and India are both rural and water civilizations and share similar philosophies of peace and unity. Therefore, the great trend of history shows that China and India share far more in common than we differ.

Dear Friends, Compatriots! The recent meeting between State Councillor Wang Yi and Indian EAM Jaishankar gave new push to the China-India relations. Next year marks the 30th anniversary of reopening of the Chinese Consulate General in Mumbai. On its eve, I would like to highlight the following 3 key prospects. 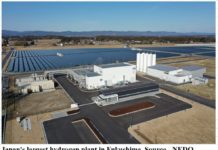 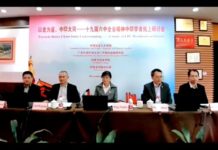 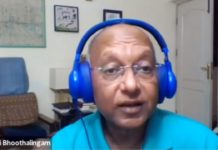 The US sues China – how much of it is truth?

https://www.freepressjournal.in/analysis/the-us-sues-china-how-much-of-it-is-truth The US sues China – looking through the fog RN Bhaskar – 23 Apr 2020 The US has finally filed a case against China.  This is...