Can SEBI pick up the broken pieces in the NSE-Chitra case? 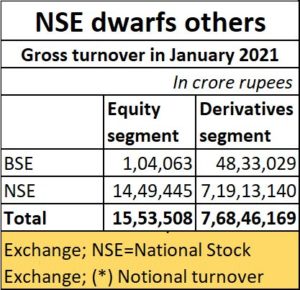 Time Member of the Securities and Exchange Board of India (SEBI). In this 190 page order (https://www.sebi.gov.in/enforcement/orders/feb-2022/final-order-against-ms-chitra-ramkrishna-and-others_56030.html) , SEBI has tried to explain what has gone wrong with NSE. But it refuses to probe, or even suggest how things can be set right.

Moreover, by focussing extensively on the emails between the spiritual guru of Chitra Ramakrishna, former MD & CEO of the National Stock Exchange (till 2016), it has made India the laughingstock of the world.  Further, by focussing on emails which suggest that the spiritual guru and Chitra were planning a pleasure trip, it has painted itself as a Peeping Tom, interested more in non-professional dalliances than on regulatory aspects.

SEBI has tried to push off all responsibility by refusing to explain why it kept quiet for such a long time, and also why no proper investigation is being conducted into the affairs of Chitra on the one hand, and the “spiritual guru” who plays a very active role in governing the affairs of the premier stock exchange in India.

To conclude, SEBI has grievously hurt three parties — itself, India’s regulatory environment and also India’s image in the world. 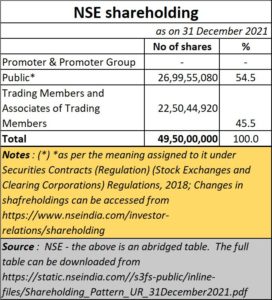 First, do bear in mind that NSE is large, dwarfing all other exchanges in India. It is also the largest derivative exchange in the world.  Its profit margins are in excess of 70% of total business done, which should be mouth-watering for any business house.  Interestingly, even though the Competition Commission of India or CCI (https://www.cci.gov.in) waxes eloquent about the action it takes against potential monopolies and unfair market practices, it seems to be unwilling to take action against the people who manage this behemoth.

It is possibly because it is big and profitable that there is an incentive to keep the spoils to itself and its key operating officers.  It has resisted all attempts to go public and become accountable to external shareholders. The government owns no shares in this entity.  There are no promoters.  Public shareholders comprise venture capital funds, alternative investment funds (AIF), foreign portfolio investors, insurance companies, trusts, FDIs, and some individual investors as well.  All of them have been fobbed off with assurances that NSE will go public soon.  More details on the investment pattern in NSE can be got from https://static.nseindia.com//s3fs-public/inline-files/Shareholding_Pattern_UR_31December2021.pdf).

Since it is not a government entity, and is not yet listed on stock exchanges, it is not yet subject to Right to Information (RTI) 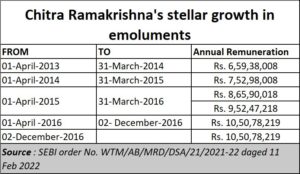 queries.  And its officers believe that they can do what they please, SEBI and many others notwithstanding.  That could explain why despite having search and seize powers, the right to interrogate, SEBI has been meek in its approach towards Chitra and her colluding colleagues.  It has merely documented the number of times it sent out queries to the parties involved, and has noted that the replies did not come in time.  But it has also concealed several of the submissions made, and the inexplicable refusal to take prompt action.

As a market regulator, it is expected to act immediately, on the same day, or within hours, if required.  Yet, its officers have been content in taking their perquisites, and strutting around as if they have the powers.  In reality, in the presence of powerful players, it prefers to mew instead.

Just look at the way Chitra profited herself.  She saw her emoluments rise substantially every year, till she became the second highest paid executive in India (after Aditya Puri, formerly of HDFC Bank).  She decided how much she should get, possibly on instructions from the unknown person or spiritual guru (more on that later).  The same generosity with funds can be seen in the way Anand Subramanian was allowed to benefit.

HR head had no role to play for salary fixation of Anand Subramanian as CSA as the same was decided by Ms. Chitra Ramkrishna. For other cases, HR had a role in discussion and recommendation of compensation of consultants/employment.”

The SEBI order also mentions that “Direct posting (of Mr Subramanian) as a consultant to MD, unequal pay of more than Rs.4 crore per annum is higher than most of the seniors at NSE.”  Prior to this appointment he was vice president leasing and repair services of Transafe Services Ltd, a subsidiary of Balmer and Lawrie. His salary then was under Rs.15 lakh per annum. Apparently, his appointment too was made on advice/instruction received from the unknown person/spiritual guru.

This is not to say that Chitra wasn’t competent, as her abridged CV alongside with show.  She was extremely competent.  In fact, almost everyone who she has worked with talked about her efficiency and her knowledge. But she was also terribly irregular in the way she managed dealings which were confidential and fiduciary in nature. That could have benefitted the privileged by a few thousand crores, and conversely made others lose out as well. The first should have caused her prompt dismissal.  The second should have earned her imprisonment, nothing less. But SEBI did not consider the latter, even though it has the powers.

To understand how inept – or collusive – SEBI has become, one needs to understand the genesis of the NSE case.

It begins in June 2015, when Moneylife published a letter it received from a whistle-blower — who works in the technology team of a Singapore-based hedge fund.  He alleged that the market manipulation taking place at the exchange allowed “certain vested brokers to get market price information ahead of the rest of the market.” A follow-up report by the magazine’s Managing Editor in early July alleged that the senior management at the NSE profited from allowing certain high-frequency traders to play the system while capital markets regulator SEBI has not acted on the whistle-blower’s allegations either. The whistle-blower had tried to alert SEBI, but to no avail.

This is today better known as the co-location or algo scandal. It uses algorithmic trading (or high frequency trading) to analyse market data, deploy appropriate trading strategies and execute trades, all at minimal cost. The benefit to those who were granted these privileges must have benefited by thousands of crores of rupees.  SEBI could have investigated them.  But it didn’t. 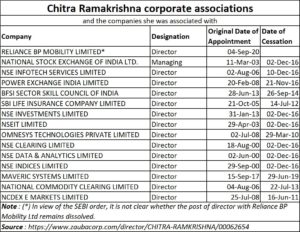 Immediately, thereafter, NSE filed a defamation suit against Moneylife. A press release from the NSE, which doesn’t name the magazine, said the exchange has sought withdrawal of unsubstantiated and misleading reports against it and “has made a claim of ₹100 crore (which can be revised upwards)” in the Bombay High Court.  Moneylife challenged the charges, and in September, 2015 (https://moneylife.in/article/the-suit-and-the-nses-conduct-seem-to-me-attempts-at-deflection-and-evasion/43335.html), the Bombay High Court — while dismissing a notice of motion — directed NSE to pay within two weeks, Rs3 lakh towards cost to Sucheta Dalal and Debashis Basu (of MoneyLife). NSE was asked to pay Rs47 lakh as punitive and exemplary costs in equal parts for public causes to Tata Memorial Hospital and the Masina Hospital for free treatment of the poor.

It is quite possible that things may not have come to a head, if NSE hadn’t tried to bluster its way through with a Rs.100 crore suit.  It could be hubris.  But that set the ball rolling.

Finally, SEBI stirred.  It sent out notices, and NSE was compelled to request Chitra, Subramaniam and a few other officers to tender their resignations.  A list of directorships that Chitra held explains the entire sequence. By December 2016, Chitra was compelled to relinquish all her positions with the NSE. Details of all directorships can be got from the website of the ministry of corporate affairs (MCA) though a better summary is available at https://www.zaubacorp.com/director/CHITRA-RAMKRISHNA/00062654.

at the Swamimalai temple in Delhi and also met him on occasions in holy places.”

On March 2, 2015, the SEBI order records that the unknown person sent an email to [Chitra] and Nawaz Patel (secretary to the MD & CEO)

I am a good friend of your foreign shareholders representation committee on your Board and would like to discuss the global trend on the dividend payout that is worldvide accepted with you in person. I am on a trip to India and in Delhi on 7th and 8th March and will be happy to meet on any of these two days at your convenience. Since 7th will be a tight schedule will March 8th Forenoon work, then we will meet at VasantVihar Delhi at my India Office.

Looking forwarding to hearing from you.”

SEBI could have done so many things, but did not.  It just gently prodded them for information, and did not investigate matters itself.

Was it because there were other more powerful people – maybe in the finance ministry – tat did not want things stirred up further?

If SEBI cannot function, should it not be overhauled?  You cannot have a regulator who is scared, and walks on eggshells all the time.  You cannot have a regulator who tyrannises the small, but lets off the big.  Chitra has been fined sums that are laughable.  This is similar to, and in keeping with, the other ridiculously low fines that SEBI has charged in the past (https://asiaconverge.com/2021/09/regulatory-games2-sebi-wants-to-be-a-player-too/).

Another example of SEBI’s blind spots is the way (https://www.thehindubusinessline.com/markets/chitra-ramkrishna-saga-investigators-scan-emails-for-coded-language/article65058360.ece) investigators have now begun examining the email exchanges between Chitra and the unidentified yogi. They have found several instances that suggest the two may have been using a coded language.

For instance, in February 2017, the guru wrote to Chitra, “Keep bags ready I am planning a travel to Seychelles next month, will try if you can come with me, before Kanchan goes to London with Kaanchana and Barghava and you to New Zealand with two children. ‘HK is a preferred transit or Singapore for onward journey.’ In case you need help, pi let me know Seshu will do the needful.”

Now that is odd because there were direct flights between India and Seychelles, a mere four-hour journey. Dubai and Sri Lanka were the only transit points for travel to Seychelles from India.  Hong Kong or Singapore had no direct connections to Seychelles in 2017 and would involve 8- 10 hours of travel. Add to this, the 3-4 hours needed to fly from India to Singapore or Hong Kong. Investigators are examining if the circuitous route was taken to hide travel details. Moreover, Chitra has only one child.  Why are two being referred to here?

SEBI did not think.  It did not investigate.  It just lapped up whatever was offered.

And why has the CCI been quiet?  It roars like a lion before the likes of Flipkart and Ola.  Why not before NSE’s top brass?

And why isn’t the finance ministry compelling the NSE to go public and become answerable to the public immediately?

These are some of the many questions that are blowing in the wind.

More about India and its gold lust