Home JMulraj The Everything Bubble is popping 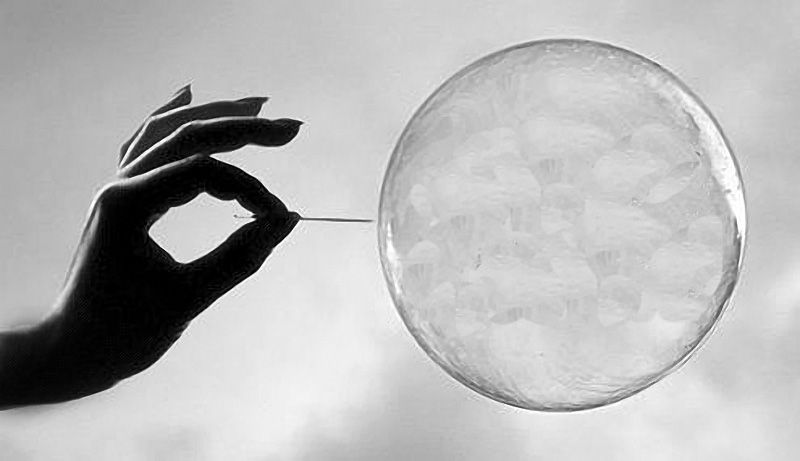 For several years, central bankers had been  printing money without regard to the future consequences  of this folly, under the misguided insanity of the MMT, or modern monetary theory. But, of course, insanity does have consequences, as we are finding out. The money printing, intended to propel consumption (which accounts for 70% of US GDP) and investment, went, instead, to inflating asset bubbles. That’s called the Everything Bubble, because all asset classes went up on the back of easy money at low cost.

Then came disruptions to the global supply chain caused by Covid, and the zero tolerance policy of China, shutting down entire cities, which included manufacturing facilities and ports, which led to the enfeeblement of globalisation. This was followed by the Russian war on Ukraine, which disrupted supply of energy, especially to Europe, and this led to a spike in prices of crude oil. Plus a shortage of food, especially wheat, which the two countries supplied 40% of the world’s needs, fertilisers, and other things.

Higher prices of crude oil led to higher prices of fuel, or gas, as it is called in America, and the shortage of fertiliser, and of wheat, decreased availability, and raised prices of, food. This shortage, combined with the earlier QE (stimulus cheques, or stymmies, to help during Covid, have led to inflation running amok. In USA it is at the highest level in 40 years. The average family’s monthly budget has increased some $ 500 a month.

To fight inflation for economic reasons (it is a monster that needs to be tamed else will derail growth), as well as political reasons (US Democrats are afraid of losing badly in November elections), the US Federal Reserve raised interest rates by 75 basis points (0.75%), more aggressively than the previous 50. Chairman Powell announced his intention to do another 75 bips in July.

To tame inflation, a previous Fed Chairman, Paul Volcker, had raised interest rates to 20%, higher than the prevailing inflation rate, knowing that it would trigger a recession. He succeeded in taming inflation, and, though a recession ensued, it laid the basis for a decadal growth of GDP.

Will Powell do that? The gap between the inflation rate in USA and the Fed fund rate is wide, and for the latter to overtake the former, would take several rate hikes, perhaps more aggressive. Each time rates are hiked, the everything bubble will deflate a bit more, and stock markets would correct.

The US Fed ought to have started hiking earlier, to try to stave off inflation, as well as to provide a bigger cushion to lower rates later, but both he, as well as Treasury Secretary Janet Yellen, wrongly assessed that the inflation was  ‘transitory’. It wasn’t, and each time an American fills his tank, he starts yellen.

Not only is the Fed raising interest rates, it is also starting, belatedly, to reduce the size of its balance sheet. The Fed Balance Sheet had increased exponentially, due to Quantitative Easing (QE). The Fed is now reversing that, and is embarked on Quantitative Tightening (QT). Which means that money will cost more and be less available.

This poses a huge risk in the reverse repo market, as explained by author Matthew Piepenberg in this article. Basically, a reverse repo market provides overnight liquidity, between banks. In Sep 2019 this market imploded, with one bank distrusting another, as a counter party risk. The Fed had to step in to keep the market greased and running. Today, as per the article, the Fed provides a daily injection of upto $ 2 trillion a day!!! One wonders what will happen if QT reduces this amount. Remember, in the 2008 crisis, it was the counterparty risk, where one bank did not know how toxic another bank’s balance sheet was, that froze the reverse repo market and triggered several institutional collapses.

This is why the likes of Jamie Dimon, Peter Schiff and others are warning of a financial storm ahead. Famed investor, Stanley Druckenmiller warns of a hard landing for the US economy in this video.

Japan, which follows MMT (and continues to, its central bank has not hiked interest rates yet), is on the verge of a systemic collapse, according to Deutsche Bank.

Foreseeing these turns of events, investors are taking a flight to safety, of their funds. FPIs have been selling Indian (and other) equity aggressively, and buying US bonds. The USD is at a 20 year high, even as Japan, obsessed with MMT and overprinting money, sees its currency fall to 1998 lows. Its debt to GDP ratio is around 250%, the highest.

China, too, is likely to see a sharp fall in its GDP, largely due to lockdowns following its zero tolerance Covid policy. Chinese provinces are seeing a decline in revenue from land sales, due to the real estate crisis, and some regional Chinese banks are witnessing customer protests. This video talks of the problems expected in its rollout of 5G telecom services. The number of base stations required for 5G are much more than 4G, increasing capex. As a result, electricity costs are far too high. China Mobil, an operator, is expected to pay (see around 5:40) $ 44 b as electricity bill, once fully operational. Its 2018 profit was $ 11 b., without 5G. Will 5G revenue be enough to give it a profit? It looks tough, as the packages are far more expensive.

Meanwhile, Russia is not doing badly, despite tough sanctions. The latest Economist says that Russia earned $ 97 b. in the first 100 days of the Ukraine war, more than the cost of it. It has cut oil/gas supply to Europe, and threatens to stop them, which would destroy European economies.

So a lot of western economic forecasting has gone horribly wrong. Despite having a load of information and insights, and good economists, they could not anticipate the impact of Russia’s war on Ukraine, in terms of inflation, rising energy prices, food shortages and availability, and the utter vulnerability of several European countries on Russian oil/gas. How could they  go so myopically wrong?

The everything bubble has popped. And recession is likely in USA, Japan, Germany, UK and other countries, with a slowdown in China. These are #1, #3, # 4, #5 and # 2 largest economies, respectively. Amongst large economies, India, # 6, is showing good economic growth, partly due to a low base effect. India has the potential to be a growth driver, but needs to address structural issues, especially in judicial reform and conflict resolution.

India, dependent on oil imports, will also be hit. For example, although May exports from India rose 20.5% to $ 39 b. the trade deficit was at a record $ 24 b. because imports rose 62%, due to higher oil prices. So for the next few months, news flow will be bad, and the sensex is likely to fall further. After that, the India story will kick in again. With favourable demographics, a large domestic market, and schemes like PLI bringing in investment, the FPIs (foreign portfolio investors) will return. The retail investor has been well rewarded in his mutual fund investment, via SIPs, and will remain supportive. Short term pain, long term gain.

Miles to go before I sleep