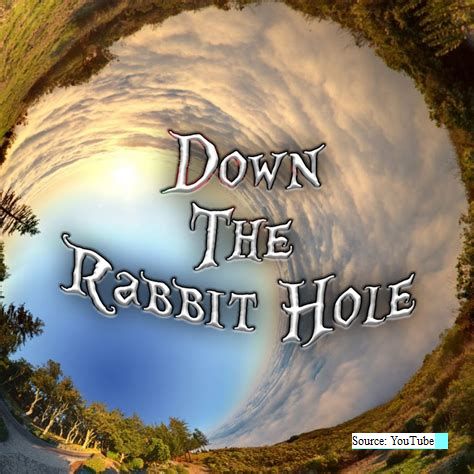 Crisis stations in India as the INR may weaken further

Is India going down the rabbit h9le? The finance minister insists that India’s financial condition is not that bad.  That India’s rupee has weakened less against the US dollar than other currencies. In fact, she points out that the INR has strengthened against the Euro and the GBP (https://www.etvbharat.com/english/national/bharat/british-pound-japanese-yen-euro-weakened-more-than-inr-fm-tells-parliament/na20220718183000641641598). 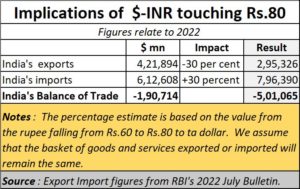 She is right.  But currency is not the only indicator for financial strength.  You have to look at what the weak rupee will do to our exports. And you have to see it in relationship to our reserves and the willingness of the country’s planners to allow wealth generators more ease in doing business.  India’s growth can be assured when every citizen feels safe and secure and works towards a common goal.  Fragmented societies seldom prosper.

As Kaushik Basu, former  chief economic adviser (CEA) to the government of India tweeted (https://twitter.com/kaushikcbasu/status/1549369094608150532?s=19) recently, “We are told there are good reasons why the rupee has reached 80 to the $. But given that the target was 40 to the $, this has greatly damaged credibility. People are asking if the 5 trillion $ economy doesn’t happen, will we then just say there are good reasons for that.”

The weakness of the INR will mean that all exports will fetch fewer dollars than they did earlier.  And since the rupee has weakened from Rs.60 to Rs.80/US$, we have assumed a 30% decline in the number of dollars that India will earn. It could be even lower, because importers immediately squeeze exporters to offer lower prices since their currency has depreciated.  But then, it is also possible that since some trade in not in USD, the impact will not be so great.  Hence, we decided to stick by the 30% decline in dollar receipts.

At the same time, imports into India will become more expensive.  That means India will have to pay 30% more for the same basket of goods it imported last year.

This could see export receipts declining to $295 billion next year, while imports could surge to $796 bn.   That could make India’s balance of trade deficit to worsen from $1.9 bn to $5 bn next year.  This is assuming that imports will not grow, and neither will exports.  It is just an exercise to show how a weak rupee will impact India. 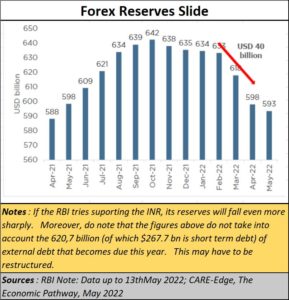 When you have a weak currency and an adverse trade balance, the dollar reserves of the country get impacted hugely.

This is where the lights begin to flash red. India’s forex reserves have been falling since October 2021. This is not a global phenomenon but is linked directly to the manner in which India has planned its forex inflows – especially foreign direct investments (FDI) which assures a country of a certain stability in its forex reserves.

India has needled its foreign investors in India – right from Vodafone to Amazon and Flipkart, to Oppo and Xiaomi. Unless you have large enough FDI, you do not needle foreign investors, because fresh investments will slow down.

Some people point to China and use that as a justification for such actions.  But again, they overlook two differences. China acts against foreign companies only when it has a huge balance of payment surplus.  Second, China adopts a meritocracy.  Its political system allows for both election ad selection (https://asiaconverge.com/2019/11/china-wants-the-world-to-listen-to-it/). It has elections at the village level.  But thereafter, every public officer has to meet targets – that includes improvement in education, healthcare, employment, and exports. If a public officer slips on such targets the consequences are harsh.  Ditto with Singapore.  India is no meritocracy. So, India cannot plan or execute as efficiently as either Singapore or China

India has refused to allow foreign investors the right to international arbitration (https://asiaconverge.com/2020/01/arbitration-and-investment-protection/), which has made most investors shy away. It banned investments from China, forgetting the adage, that it does not matter whether the cat is black or while so long as it catches mice.  Foreign investments create jobs, create wealth, and reduce dependence on portfolio investments (FPI).  According to a statement, before the Lok Sabha in December 2021,  Piyush Goyal, commerce and industry minister, admitted that as many as 2,783 foreign companies and their subsidiaries closed operations in India between 2014 and November 2021 (https://www.financialexpress.com/industry/mncs-continue-to-exit-india-as-the-country-markets-mature/2531374/),   Just last week, Devas Multimedia charged the government (once again) with bad faith and even unfair play which  caused U.S. Senator Chuck Grassley to write a letter to U.S. Attorney General Merrick Garland to raise concerns that India (and other foreign governments) are abusing Mutual Legal Assistance Treaties (MLAT) and the Interpol Red Notice Process. (https://www.grassley.senate.gov/imo/media/doc/grassley_to_justice_deptmutuallegalassistancetreaties.pdf). 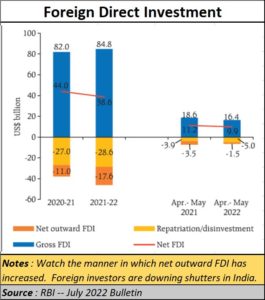 Watch the way the net outward FDI has swelled.  The RBI Bulletin 2022 points out that “During April-May 2022, gross inward foreign direct investment (FDI) marginally decreased to US$ 16.4 billion and repatriation of FDI increased to US$ 5.0 billion from their levels a year ago.”  Translated, it means that FDI outflow swelled from 38% to 45% of total FDI.

When foreign investors feel uneasy, they walk out with the money the country needs most desperately.  India has let this type of money flee India.

The walls close in

Then there is a third cloud that that can  become a thunderstorm.  India has to pay back $620 billion of external debt (https://asiaconverge.com/2022/07/financial-realities-demand-fdi-urgently/) this year (of which $267 is short term in nature).  Forex reserves have already tumbled from a peak of $642 billion in October 2021 to $593 billion in May 2022.  If it pays the $620 billion, its reserves will slip into negative territory.  Hence it is certain that India will work towards renegotiating its debt and rescheduling them. That could add to expenses.

This will crimp the RBI’s ability to intervene in forex markets to prevent a slide in the INR value.  Already people have watched it slip beyond Rs.81, then recovering a bit (https://www.msn.com/en-in/news/other/rupee-may-fall-to-81-against-us-dollar-amid-widening-trade-deficit-risk-off-sentiments-and-fii-outflows/ar-AAZJIjA).  It could slip further unless immediate measures are taken.

First, it is important to recognise that the current GST rates will further slow down the Indian economy even while exports need to be galvanised.  Protests against GST have already begun (https://www.newindianexpress.com/nation/2022/jul/20/opposition-parties-protest-against-gst-hike-raise-slogans-against-modi-government-in-parliament-pre-2478643.html).

There are two problems with the new taxes.  First, the government seeks to tax the organised over the unorganized.  Packaged foods are taxed, while unpackaged or loose items are not.  It is similar to an earlier provision by  the former finance minister P. Chidambaram, who sought to tax credit card transactions.  Taxes which encourage the unorganized are repugnant.  They send out the wrong signals.

The government can argue that it is spending on social welfare and infrastructure.  But it should also ensure that revenues for industry and economy also grow. You don’t tax people additionally when their own revenues are shrinking.

India needs to boost domestic productivity.  It must abolish bans on futures trading (https://asiaconverge.com/2022/07/commodity-trading-promise-vs-performance/), and instead ban import of agricultural commodities like edible oil (https://asiaconverge.com/2022/01/the-government-lets-down-indias-edible-oil-industry/. Ideally, it should promise farmers a significantly higher price for oilseeds for the next two seasons.  That will allow farmers to plan to grow more oilseeds. Encouraging higher prices in specific crops like oilseeds will wean farmers away from what which is in surplus. That will improve domestic crushing (hence employment) and reduce imports. It will improve agricultural prosperity as well.

Remove all subsidies for sectors like milk, which already know how to manage without subsidies.  Don’t cripple a healthy sector (https://asiaconverge.com/2020/04/for-milk-subsidies-is-the-path-to-perdition/). Encourage contract farming and allow farmers to give their lands to entrepreneurs on long lease. 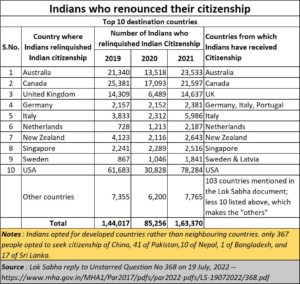 Even today, the potential for India is immense.  But the government needs to think afresh.  It needs to curb the temptation of being muscular, and instead become more investor and business friendly.  Else, as the indicators currently suggest, there will be a lot more of pain ahead. 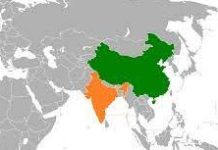