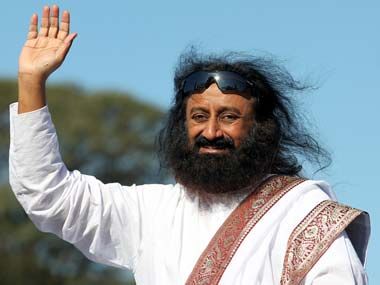 Editor’s note: This is the first in a three-part series on Hinduism, godmen and the judiciary

It may sound surprising. Christianity produced only one saint in India — Mother Teresa — during the past three decades. But look at Hinduism. Over the past two decades Hindus have managed to ‘create’ more than a handful of them.

Take some of the prominent names: Dhirendra Bhramachari, Asaram Bapu, Ma Anandamayi, Baba Ramdev, Baba Ram Rahim Insaan, Putuparthi Sai Baba, and of course the man who is much in the news — Sri Sri Ravishankar. So what is that makes Hindus create more godmen than other religions? There could be two reasons. First, the absence of a single organisation, or holy book that is the final word for the Hindus. The Hindus have over 300 gods, and more than a dozen holy books.

What is even more interesting is that many of the holy books themselves have more than one version, with different stories and story endings. So there are several versions of the Ramayana; there are ‘apocryphal’ Upanishads, there are several versions of stories in the Mahabharata. The list could go on. Thus, each Hindu is actually free to choose the stories he likes, and the interpretations that agree with him. That could explain why there are so many sects and sub-sects in Hinduism.

Thus, notwithstanding the shrill cries of the people who understand Hinduism least, there is no official version of Hinduism, and no accepted ultimate god.

But there is an even more pernicious reason for Hinduism spawning so many more godmen than other religions. It is the sheer inability of the existing godmen from the Hindu mainstream to market themselves. Thus the Shankaracharyas get fewer eyeballs than a Baba Ramdev. In fact, these holy men get almost no grant of land or other benefits from the government that the newly emerged godmen get.

Compare this with the tracts of land that governments have ‘given’ away to a Baba Ramdev (Maharashtra has agreed to give him some 200 acres in this state). Look at the land holdings of an Ma Amritamayi. One does not get to hear much of the lands that Swami Dhirendra Bhramachari had converted into a major ashram during the days when he was ‘powerful’. Ditto with the grants that a Sri Sri Ravishankar enjoys — whether it is permission to use wetlands along the Yamuna, or it is the use of armymen to work on a missionary basis (with no payment) on his site.

Is it because the mainstream holy men of Hinduism lack the skills or the willingness to promote their views? No, the real reason is that all the collections that the main temples get each day, the money is controlled by the government – both state and central. The governments have done their best to ensure that India’s biggest temples are not allowed the flexibility or liberty to spend the money the way they want to.

For instance, one temple might want to set up homes for the elderly. Another temple trust may want to set up meditation halls. A third may decide to focus on medicare.

For instance, the Nirankari sect has a mission in the suburbs of Mumbai, where it offers its devotees medical (pathological) tests at nominal costs. A blood test costs Rs 10. An X-ray costs Rs 25. It comes, therefore, as no surprise that more ‘followers’ visit the “pravachans” of the Nirankari sect than they do the bigger temples. There is convenience (near their place of residence), and there is relevance (their health care needs are met). And there is a new community that is being formed, which is what draws people together, and worship the visionary.

Each of these methods would make the temple a lot more relevant to the communities they serve and relate to. In fact, the priests of Tirupati, Sabarimalai, Vaishnodevi, Shirdi and a host of other temples would be delighted to increase their relevance to the community. But they cannot, because the community leaders are not allowed to decide how the funds should be used. It is normally a government appointee who enjoys these powers.

The result: mainstream religious heads get marginalised. And in the resultant vacuum, politicians prop up other ‘godmen’ and allow them the freedom to use their devotees’ contributions the way they want. Politicians have a vested interest in doing this. The godmen attract followers. And the followers are persuaded to vote for a particular party. Thus politically propped up godmen grow in stature and in collections (in percentage terms) than mainstream holy men (who refuse to call themselves godmen).

This is sad. Remember, a politician who props up ‘godmen’ has a five-year vision — how to create votebanks for the next election. If a godman fails in achieving this objective, you can be certain that a new godman will be created.

If a politician has a five-year horizon, the bureaucrat is only marginally better. He looks to a sinecure of around 20 years, by when he will be eased out, or will pass his time on earth.

This is in sharp contrast to genuine community leaders — who have a vision of 200-300 years for the community they serve. That, in many ways, explains why you will not find a single Sikh beggar on the streets (ditto with the Parsis).

True such leaders make mistakes. But communities have an auto-correct facility, which allows them to redress grievances, and ensure that the flock stays together. The best of community leaders – call them holy men or any other name – try to focus on community development programmes. This could be education (most crucial of all), community welfare or even community health.

It is worth remembering that the Tirumalai Trusts, which control the cluster of temples that comprise the Tirupati holy shrines once ran some of the best educational institutions in India.

However, ever since the government took control of the temple trust, the educational standards that these institutions used to cherish began to crumble and the colleges and schools have lost much of their reputation.

Against this fading glory, you have the newly arisen godmen who become the favoured few. Till, of course, the political dispensation changes.

Can this be stopped? Of course. Even the Supreme Court is against the government trying to control temple trusts.

Next: Part II — The Supreme Court attempts to rescue temples

Cattle slaughter ban missteps may be a factor in the BJP’s...

https://www.moneycontrol.com/news/politics/comment-cattle-slaughter-ban-missteps-may-be-a-factor-in-the-bjps-electoral-woes-2579681.html Cattle slaughter ban and politics It will be interesting to see how the ruling party overcomes the grave mistakes it has made in the business...