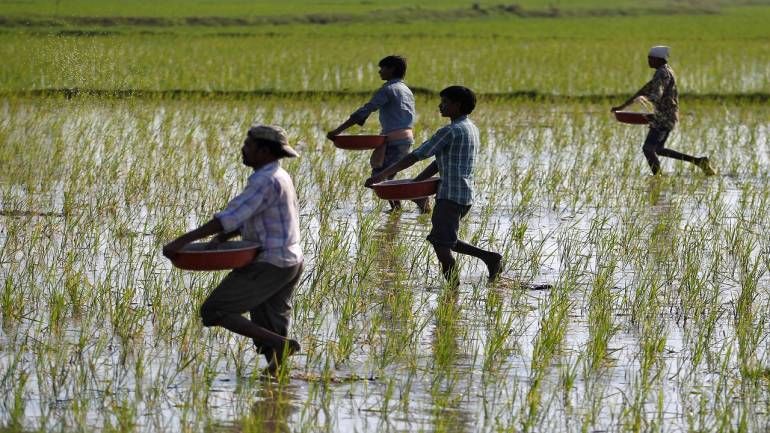 To some extent the euphoria might be justified. Increasing farm production does normally mean higher incomes for farmers.

Most media reports were euphoric last fortnight about the record foodgrain production for the year 2017-18.  It marked a possible resurgence in agrarian fortunes after two years of inadequate rainfall.  And it raised hopes that this agricultural revival may translate into favourable tidings for the ruling party when it goes to various polls over the coming year. To some extent the euphoria might be justified. Increasing farm production does normally mean higher incomes for farmers. That usually does translate into more votes.  The trouble is that when there is oversupply, farm produce prices fall.

That is where the government’s proposals for agriculture, put forth in the recently tabled Union Budget 2018, make immense sense.  One of the first steps Arun Jaitley, Union Finance Minister, announced was setting the minimum support price (MSP) at 1.5 times the cost of production of the kharif (summer) crops. Rabi crops have been ignored for the present,. According to him, the Niti Aayog – in consultation with state governments — will put in place a mechanism to ensure that farmers get adequate remuneration should crop prices fall (http://www.moneycontrol.com/news/business/budget-2018-great-news-on-the-farm-front-if-ground-realities-permit-2497655.html).

The proposals sound good.  But there are two problems that they could confront.  The first will be – inevitably –the benchmark costing that the government decides to take into account.  Rural folk are already up in arms stating that the government’s estimates of agricultural costs are at variance to those that are actually incurred by farmers.

That is one issue that the government will have to deal with.

The weak sell at distress prices

But the second problem is far more daunting.  How does the government plan supporting minimum support prices if there is no purchaser for the produce at such MSPs?  A support price mechanism works only as long as there is demand.  But when there is overproduction of grain, supply outstrips demand.  What happens to farmers who cannot sell their crop?

Hitherto, the ways of the government, when dealing with rice and wheat procurement, has been to get the Food Corporation of India (FCI) and its clones in state governments (State Warehousing Corporations or SWCs and state trading corporations or STCs) to pick up grain from the most powerful among farmers.  These farmers are often well connected politically.  Some farmers are politicians themselves.

Once the procurement quotas have been fulfilled, the entire purchase exercise stops.  Those who could not sell their grain are compelled to sell them at distress prices.  In the case of other (non rice and wheat) crops, the crisis is likely to be greater.  There is no procurement agency.  Thus, the farmers will be left to the mercy of politician-controlled purchase networks (most APMCs for instance) who will procure grain at the MSP only from well-connected farmers.  Once again, marginal farmers will be left to fend for themselves.  They will have to sell the grain at distress prices.

The only way to prevent sale at distress prices is by having someone guarantee procurement at the MSP, irrespective of the quantities and the locations involved.

That seems fine but for two more attendant problems.

The first relates to grain storage capacities with the government. India’s total storage capacity is around 63 million tonnes.  And this includes storage where there is no roof — the grain is merely capped with tarpaulin.  Covered storage would be only around 60 million tonnes.  It is quite possible that agencies MCX and NCDEX linked warehousing companies (like NCMSL and NBHC) may have augmented their own storage capacities, but there are no consolidated numbers available. They are, therefore, not expected to be substantial.

No storage capacity means that even if the government were willing to procure all the grain, it would not know where to store them.

True., the government has plans to put in place development and upgradation of 22,000 rural haats (or markets) for which the finance minister has set aside Rs.2,000 crore in the recently tabled budget. Another scheme announced was “Operation Green”, with a provision of Rs500 crore, for promoting agriculture logistics. The government has plans to link villages and rural roads to agriculture markets, secondary schools and hospitals under the Pradhan Mantri Gram Sadak Yojna (PMGSY).

All those are good ideas.  But the crux of the matter will always remain – can the grain be stored? Current data suggest that this might be quite difficult.

The only pious hope is that at least one-third of the 277 million tonnes of foodgrain will end up for self-consumption by farm-based families (both land owning and those who work as landless workers)..  That will still leave the market with around 180 million tonnes against a storage capacity of 60 million tonnes.

This means that the remaining grain could end up in the open, exposed to sun, rain and pests – waiting to rot away.

And this is where there is a growing unease. Many fear that government officials in collusion with powerful political interests do not want the storage situation to improve (http://www.asiaconverge.com/2016/05/grain-procurement-how-will-narendra-modi-government-handle-this-scam-html/).

They point to how — in September 2010 — grain left out to rot in the rain and sun incensed the Supreme Court to such an extent that it ordered the grain to be given away free of cost to the poor rather than allow it to rot.  When the then agriculture minister (Sharad Pawar) stated that he would look into the apex court’s suggestion, the justices retorted that the stipulation about free grain distribution among the poor was not a suggestion but an order.  In spite of this exhortation, the grain was not given away free, but was allowed to rot.

This is where many believe that the reluctance to augment storage arises from the desire to destroy evidence by those in charge of procurement.  Much of the grain, they argue, was purchased at prices meant for high quality grain, when in fact it was substandard.  To prevent anyone from finding out this misallocation and hence diversion of funds, allowing the destruction of grain in sun and rain makes immense sense. Giving the grain away to the poor would again call into question the quality of grain supplied.  The last thing the procurement officers want is an audit.

That is why, they argue, that the MSP strategy of the government will just not work.  It will result in more diversion of funds through the procurement route.  Or it will mean weak farmers selling their grain at distress prices. Either way, the fat-cats in trade, bureaucracy and politics would benefit at the cost of both farmers and taxpayers.

The only way out for the government to make the MSP workable is to immediately create incentives for private investment to pour into the creation of more warehouses which are then approved by the Warehousing Development Regulatory Authority or WDRA (http://www.asiaconverge.com/2017/08/is-wdra-a-functioning-organisation/).

But such a scheme would work only if the government insists that any grain that seeks MSP protection must be sold through a WDRA approved warehouse. The warehouse, which is supposed to be within a short distance from each farm, is then supposed to issue to the farmer a (dematerialised) receipt recording the quantity and the quality of the grain sold.

That would require the presence of an approved assayer, who is then accountable for accepting any grain and certifying its quality/quantity.

Since the government cannot allow the price on the commodity exchange to fall below the MSP, it becomes the guaranteed purchaser of last resort for any quantity of the grain at the applicable MSP. The government then has the right to sell on commodity exchanges in India or even overseas. This would certainly apply to any surplus grain that the government cannot warehouse.  The surplus grain is best defined as any quantity of grain that cannot be warehoused or even sold to local traders at the MSP.

True, the government may have to sometimes sell the grain at prices that are lower on international commodity exchanges than those prevailing  in domestic markets.  But that reduced price is at least better than a zero price if the grain were to rot.  Moreover, since now there will be an assayer guaranteeing the quality and quantity of grain purchased, any discrepancy between the reports of the assayer attached to global commodity exchanges and the domestic one will immediately invite scrutiny.

This way, the farmers can be protected, corruption can be reduced, and value destruction of grain (by allowing it to rot in the open) can be prevented.

But that requires genuine commitment to stomp out corruption on the agricultural front.  So far, the government has not shown much willingness to clean up corruption and moneylaundering on the farm front (http://www.asiaconverge.com/2017/11/agricultural-income-and-black-money/). But if the government actually wants to protect farmers without bleeding the national exchequer and hence the tax payer, it must adopt this method of onward sales of assayed grain through commodity exchanges.

Failure to do this would reinforce the suspicion that the government is not really keen on putting a lid on corruption.  It would also ensure that the taxpayer will continue to be burdened by the cost of corruption that the grain procurement business is believed to promote.  And as the costs swell, it is possible that the poor farmer too will eventually be let down.

All this must be avoided at all costs.