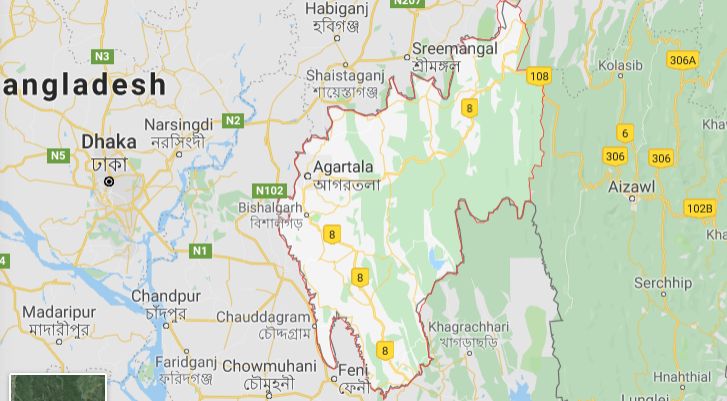 Business could boom big time in Tripura, but challenges remain

Chief Minister Biplab Kumar Deb is optimistic about improving the quality of rubber production as well as the yield.

In the coming years, businessmen will witness the emergence of Agartala as the hub for transportation to the Northeast, and of Chittagong as the biggest trans-shipment hub in the Bay of Bengal (https://www.moneycontrol.com/news/business/economy/agartala-on-its-way-to-becoming-a-major-hub-for-trade-and-commerce-3556891.html).  It remains to be seen if Agartala will be able to capitalise on this geo-political advantage.

In some  ways, Tripura has been luckier than most other North Eastern states.  Its decadal population growth has been quite close to the national decadal growth of population of 17.7% especially since the 1990s. There has been little influx of migrants since then.  Moreover, with the state being bordered by Bangladesh on three sides – the fourth side is connected to India), the normalizing of relations between Bangladesh and India has meant a great deal of peace for this state.

That is one reason why the state government now wants Tripura to notch up plans to become a big exporter of goods and services.  Hitherto, it has largely been an importer.  It imports rice, vegetables,  clothes and building material. Even milk (often in the form of powder). Much of this is paid for by oil and gas (more on this later) and by the rubber industry. Tripura remains the second largest producer of rubber in India (after Kerala) though the state has done nothing to put this distinction on the maps of this country.  Even the rubber board makes a passing reference to Tripura.

But go through the annual report of the Rubber Board, under the ministry of commerce, (http://rubberboard.org.in/rbfilereader?fileid=120) and you will discover that Tripura does have major R&D centres for rubber (pg 67 of the report).  But its contribution remains unknown. The private sector is also to blame.  True, Tripura has the second largest number of licensed dealers in India for rubber – Kerala has 6,686, but Tripura trails at 529 (country total 8,252 — pg 81 of the report), And when it comes to applying for additional licences in 2016-17, there were 734 applications from Kerala, and only 4 from Tripura.

The state accounts for around 60,000-80,000 tonnes out of the 690,000 tonnes of rubber produced annually (the state website does not provide any information on this). Information has to be obtained from secondary sources (https://www.allindiarubber.net/uploads/Media/pdfs/natural-rubber-production-844.pdf). Yet the chief minister Biplab Kumar Deb is emphatic about improving the quality of production as well as the yield, and lucrative markets. He points to the fact that Tripura has lots of natural gas.  Oil India and ONGC (http://www.newindianexpress.com/business/2017/jul/27/ongc-intensifies-exploration-of-gas-in-tripura-1634325.html) have their presence in this state, and Vedanta is trying to have a presence here (https://www.downtoearth.org.in/news/energy/vedanta-exploration-sanction-is-ongc-meeting-tripura-s-natural-gas-needs–62689).

Chief minister Deb is trying to lure investors to use natural gas to extract carbon black which can be used with natural rubber for tyre production.  “We are trying to persuade investors to come here and use our resources,”  he told this correspondent.  The fact remains that India is a booming market.  It is the fourth largest tyre market in the world. The industry itself accounted for an annual turnover of $ 12,700 million in the year 2015-16, with the tyre sector contributing to $7,600 million, non-tyre sector $ 5,100 million and export $ 2,300 million. India is the sixth largest producer of natural rubber, and the second largest consumer of natural rubber (for industries as diverse as balls to balloons)

Another industry Tripura is focussed on is milk. It believes it could be a major player in the dairy farming and livestock rearing business. In December 2018, a team from Amul (actually Gujarat Cooperative Milk Marketing Federation) flew into Agartala to work out ways with the state to develop dairy farming there.

The North East holds out the biggest promise of dairy development (http://www.asiaconverge.com/2017/02/nddb-and-dairy-farming-in-india/).  It has lots of water, foliage and chaff.  NDDB is already promoting a milk collection centre and cooperative farms in Guwahati.  Amul could be setting up its centre in Tripura.

The North East imports milk (usually milk powder) worth around Rs.18,000 crore each year, with Tripura accounts for Rs.1,100 crore).  Tripura will now be connected through Chittagong to almost all the other South East Asian countries which are also milk-deficient.  Thus, Tripura could have two major markets – North East India, and south east Asia.  Of course, this will also make it a hub for meat and leather-goods as well.

Another focus area is travel and tourism.  Tripura has some of the most picturesque spots – lake palaces, sanctuaries and places of exquisite natural beauty. But the chief minister’s primary focus is on spiritual tourism.  His reasoning is simple.  Some of the holiest of shrines – especially those related to Shiva and Devi – can be found here.  Pilgrims are less fussy about accommodation and travel comforts.  So that could be a good place to start.  The improvement in accessibility by air, road, river and rail will only help the state bring in more tourists. “Today, we do not have a single four-star or five-star hotel,” he adds.  “We will improve our lodges in our places of tourism, and then begin advertising them as well.” Travel and tourism is indeed a great way to make money, increase visibility and create employment.

There are other markets as well.  Tripura imports around 20,000 tonnes of fish annually (from Andhra Pradesh, West Bengal and Bangladesh).  It has already created nurseries for fish fingerlings for farmers as every rural household has a backyard pond. The government wants to boost fisheries both for local consumption as well as for exports.

But a big ambitious plan is medical tourism.  Almost 85,000 Bangladeshis come to India each year, spending almost Rs.4 lakh each, for medical needs.  Deb wants to change this.  He has already offered the two biggest hospitals in Agartala to the largest hospital chains in India.  “We are in discussions,” he says.  “Once we clinch the deal, it will benefit both Tripura and the Bangladeshis.  We will develop the medical tourism business, while the Bangladesh patients will save at least Rs.1 lakh on travel, because we are next door.”

New varieties of rice and fish feed are being developed.  So is cattle feed for the cows.  The state has already given away some 1,000 cows, and wants to increase the population by 10,000 more within a couple of years.

All this could be good news to investors and businessmen.  But there is a fly in the ointment.  Such plans are not backed up with data.  The state’s websites have little or no information.  Even figures sent to the government are missing.  Take the Economic survey for instance (see table). Data for Tripura is missing.

Unless you have reliable data, you cannot plan reliably.  Money does not come easily into places where there is uncertainty.  Data lends credibility and certainty. If only the state could do that, it is quite possible that investors will begin to flock there.

Interim Budget: Great for elections, but worrisome for the economy

https://www.moneycontrol.com/news/business/budget/opinion-interim-budget-great-for-elections-but-worrisome-for-the-economy-3479481.html Budget 2019 -- Great for elections, bad for the economy RN Bhaskar -- 04 February 2019 The mood in the BJP ranks is upbeat.  The recently...