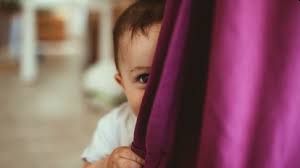 Last week was full of chest thumping for India as it hosted the G20 Summit in Mumbai.  The city did everything to make itself look prettier than it is.  Slums were hidden from the view of visiting guests, by strategically placing welcome banners on either side of the highways.  Traffic was not allowed to be parked illegally (unlike normal times). Even the Brihanmumbai Mahanagar Corporation (BMC) instructed its contractors to wash the roads every day (it should have been doing that regularly, isn’t it?).

But then the city was doing exactly what the country has been doing when it comes to economic performance. 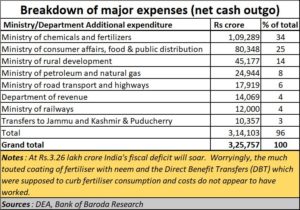 The government tried to boost its image by pointing to how India’s growth rates were higher than that of most countries in the world.  That its currency had not tumbled as steeply as of other nations. That it had got more foreign exchange inflows than most other countries, that India would soon become the third largest economy of the world.

But then, when you peek behind the curtains, you find a worrying picture.

India’s fiscal deficit is higher than that of any other G20 member (https://indianexpress.com/article/opinion/columns/india-fiscal-deficit-g20-gdp-inflation-8319179/).   Moreover, this fiscal deficit is likely to grow further.  Its unemployment rates (as a percentage of the working population) are higher than those of its neighbours (https://asiaconverge.com/2022/10/pli-and-the-indian-economy/). 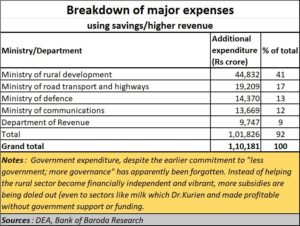 Says Sonal Badhan, Economist  with the Economics Research Department of the Bank of Baroda in the Bank’s  13 December newsletter, “ Union government has sought grant for additional expenditure of Rs 4.36 lakh crore, of which Rs 1.11 lakh crore will be met through higher revenues and overall net cash outgo is projected to be at Rs 3.26 lakh crore. This spending will be over and above the budgeted amount of Rs 39.45 lakh crore for FY23.”

She adds, “The increase in total expenditure of Rs 3.26 lakh crore will result in total size of the budget going up to Rs 42.7 lakh crore assuming nothing else changes. The fiscal deficit under ceteris paribus conditions will increase from Rs 16.6 to Rs 19.9 lakh crore. The budget was premised on the GDP in nominal terms to be Rs 258 lakh crore. However, based on the developments during the year which is characterized by high inflation we expect the GDP to increase to Rs 275-280 lakh crore. With no other change in the budgetary numbers the fiscal deficit ratio would be between 7-7.1%.”

One problem has been the government’s penchant for granting subsidies and special fund allocations.  In agriculture the grant of subsidies has continued to soar.  Fertiliser consumption and expenditure which was expected to go down in 2014 – the government said that Direct transfer of benefits (DBT) and the coating of fertilisers with neem would prevent misuse, theft, and waste.  None of that appears to have happened.  Moreover, it has continued to pour money even on sectors like milk which Verghese Kurien had developed into a self-financing and financially-profitable model (https://asiaconverge.com/2022/09/world-dairy-summit-forgets-verghese-kurien/).  Milk accounts for the largest 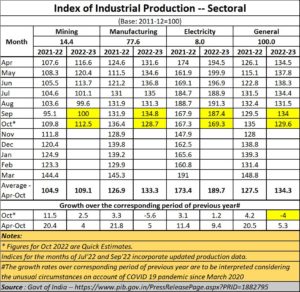 share in agricultural GDP, higher than rice and wheat together.  But now subsidies threaten to cripple even this vibrant sector (https://asiaconverge.com/2020/04/for-milk-subsidies-is-the-path-to-perdition/).

On 12 December 2022, Madan Sabnavis, chief economist with the same bank, pointed out that the country’s “IIP [Index of Industrial Production] growth at -4% is a surprise as we had expected flat growth of 0.5%.”  Talk to other economists, and you realise that this is a 26-month-low for India.

Worse, the decline has been witnessed across almost all categories.

Mahua Moitra, Member of Parliament in India in her scathing observations in Parliament on 13 December 2022 (https://youtu.be/AuOvBWDrjAI), stated that India had witnessed a negative growth in 17 (out of 23) sectors which make up the industrial production. This is serious because industry remains the largest employment generator after agriculture. 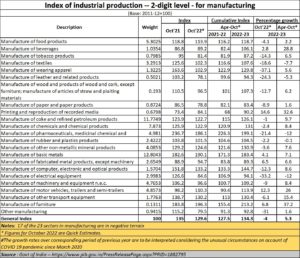 Sabnavis also points out how the capital goods sector has been disappointing as it indicates that investment is lagging.  These columns have been saying this all along (https://asiaconverge.com/2022/05/india-and-ease-of-doing-business/).  Negative growth comes over negative growth last year too. Clearly, private sector investment has not picked up so far.

His report points out that consumer goods continue to disappoint this time too as both durable and non-durable goods have witnessed de-growth. This is a let-down as one would have expected them to be buoyant during the festival month of October. He goes on to say that “Future prospects look not so positive as we move to the end of the festival months.”

Of course, the deficit figures will cause a surge in GDP growth, since it is possible to grow the GDP with borrowed money.  That is where the deficit figures should cause much worry.  Similarly, subsidies and doles eventually cause tax incomes to soar, especially through GST (https://asiaconverge.com/2022/11/gst-growth-does-not-mean-that-the-economy-is-growing/).

Yet, the government proudly points to the growth tax revenues and GDP rates to show that the economy is growing.  But that growth is hollow because the borrowed funds have not translated into capital (GFCF or gross fixed capital formation) which helps create output and employ people.

Quit India with a difference

Finally, it is alarming to see high networth Indians leaving India.  According to Amit Mitra, former director general of FICCI and later finance minister of West Bengal, at least 35,000 HNIs have left this country (https://twitter.com/DrAmitMitra/status/1451056778846740483?s=20&t=6YkUtF6EBzDZ1AeME7vu6w).  These are the people who help create jobs and facilitate investments.  Equally worrisome is the surge in the number of Indians surrendering their passports and taking up citizenship in another country.  In 2021, 1.63 lakh surrendered their citizenship — https://asiaconverge.com/2022/07/major-financial-turbulence-ahead-inr-may-weaken-further/.  Even this high number surged to 1.84 lakh in the past 10 months according to figures presented before the Parliament last week. According to Moitra, as many as 12.5 lakh Indians have surrendered their passports since 2014.

This is the most worrisome indicator that all is not well in India.  Its economic policies desperately cry out for change.  The country has to reduce its dependence on raids, seizures and chargesheets by its enforcement officials. If India cannot bring domestic investors to set up production capacities and employment opportunities, this deficit financing could hurt India terribly in the coming years.

That is why the need for the Census surveys to be done immediately is a crucial requirement (https://www.rediff.com/news/column/t-n-ninan-why-should-data-not-go-private/20221121.htm).  If people have died in the Covid pandemic, or have left India, we need to know the exact population that this country has.  Similarly, if there are bogus Aadhar cards and hence election cards, the Census could help reduce such numbers (https://asiaconverge.com/2020/02/aadhaar-cards-populations-many-ways-rig-numbers-financial-transactions/).  It is worth recalling how in February 2020, Sanjay Dhotre, minister of state for Electronics and IT, informed the Rajya Sabha (reply to Unstarred question No.527 which enquired about Aadhaar cards* — https://rajyasabha.nic.in/rsnew/EDAILYQUESTIONS/sessionno/251/EU7.pdf), that  “Seven states have Aadhaar more than the projected population as on December 31, 2019,”

Getting the Census done is an economic imperative.  It is on such information that economic plans are made.  It is imperative for elections as well, and hence it is advisable not to hold the 2024 elections till the Census count is done and the results compiled.

India has hurting terribly.  A diagnosis is urgently required.  The Census and a review of the causes which cause the pain are urgently needed.  Just putting banners along highways inviting the G-20 delegates will not remedy the situation.  It could make things worse.

Note – * – Curiously, the URL provided for the Lok Sabha document is about seven states confirming that more Aadhaar cards had been issued than the population of these states, is no longer valid And the file location has been changed.

But corroborative confirmation can be got from