You cannot wish the rouble away

Yes, it is counter intuitive.  Many expected Russia to buckle after the first news of serious mistakes in its military strategy against Ukraine. Many may have thought or hoped that the bear would slink back to the Urals or Siberia.  But no.  Russia proved that it could stand up to the combined onslaught of the EU, UK, and the US (of course).  Nothing showed up the absurdity of t 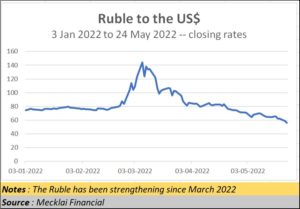 Of course, the BBC or the CNN did not make any mention of this.  But financial markets seldom lie.  They are far more brutal in their depiction of what the markets want, or reject. This is one area that the propaganda machine does not control to a very great extent. And they tell you that, yes, the rouble (also written as ruble) did stumble immediately after sanctions were imposed. But it  regained its stride, and has only become stronger.

The rouble began falling against the US$ since March itself. From around 77 to 80 to a US$ in the first two months of this year, it suddenly weakened to 106 to a dollar.  It then began to counter the combined onslaught of the western world.  It is currently at 55, stronger than before the war began.

There are three main reasons why Russia did not go down and under.

First, Russia is much more than just another country, as we pointed out in our earlier article (https://asiaconverge.com/2022/04/the-us-gambit-is-scorching-the-world/).  It produces huge quantities of grain and minerals that the world needs. An embargo on Russia is now beginning to hurt the entire world.

Second, Russia already had an ally in China which had been purchasing its oil and gas all along.  It has also begun purchasing water. And now, as explained below, it also has a copper deal.

Third, Russia had already begun working around its depleting population – its demographics are terrible.  It has a population density of just around 8.4 people per km2, compared to 34 for USA, 106 for the EU, and 145 for China.  So, it began asking China to help develop its mines for extracting valuable minerals.  Today, two of the largest copper mines are being exploited by China in Russia’s Siberia with an investment outlay of over $15 bn (https://www.ft.com/content/d2c1cdad-f075-42a9-9372-2b54269f6316). Russia has the world’s third largest copper reserves – after Chile and Peru.

India too could have done this.  This author wrote – as early as 2009 – about the immense opportunities both geography and demographics offered India and Russia (https://www.livemint.com/Companies/wDLWbd3OWUGppEzYYC0yYO/The-Capitalist–With-increasing-water-needs-will-China-deh.html). It did not go beyond its tie-up with Russia in the oil sector efforts (through ONGC-OVL).

What India overlooked; China grabbed.  Today, Russia is more vibrant with mineral and oil exports than before the war with Ukraine.

There was a fourth reason as well.  It suddenly insisted, that all oil and gas purchases from Russia by EU countries would henceforth have to be paid for in roubles.  That has contributed immensely to the rouble regaining its strength.

Finally, in a strange coincidental move, Saudi Arabia agreed to allow purchase of its oil in both China’s CNY and Russia’s roubles, in addition to the dollar.  UAE followed suit.  Then came in Turkey with its refusal to permit Finland and Sweden to become part of the EU and hence NATO allies. Were the Islamic nations finally ganging up against the US which is known to be hostile to Muslim interests in geopolitics?  That isn’t clear yet.  But there is something unusual happening. It does merit further study.

But the US dollar has lost the Russian trade, and part of the Middle East trade as well.

Moreover, the manner in which the US seized the (bank and non-bank) overseas holdings of Russia has made countries wary about holding the US dollar in their reserves.  Many countries have therefore reduced the percentage of dollar holdings.

But then, it was the US which wanted this war. It wanted the EU to purchase its gas rather than Russia’s gas.  It  wanted to cauterize Russia (https://asiaconverge.com/2022/02/ukraine-the-war-that-usa-wants/).  To do this, it had to isolate Germany from Russia and stop the Nordstream2 pipeline.  And to achieve this it provoked Russia to a war against Ukraine.  That made it difficult for Germany to defend its own interests.

Surprisingly, even Germany began to toe the US line, though it was one of the key parties that had earlier advocated the need to ensure that NATO did not move eastwards.  That was a promise the then Russian premier, Mikhail Gorbachev, extracted from Helmut Kohl, the then German Chancellor.  Germany wanted a unification of East and West Germany.  Russia (then USSR) was willing to do this and hand over East Germany, in exchange for this assurance. Kohl in turn got other leading powers of the world, including France and UK along with the US to agree to this (https://asiaconverge.com/2022/03/the-ukraine-crisis-this-is-the-way-the-world-ends/). Germany’s inability to stand up for this agreement is thus most surprising.  Maybe, the current Chancellor does not have the same tenacity and persuasiveness of  Kohl and Angela Merkel (the former German chancellor).

As a result, the fires that the US has stoked could now singe the entire world (https://asiaconverge.com/2022/05/oil-could-climb-to-over-200-a-barrel/). The US and its allies have raised their howls of protests at Russia impounding Ukraine’s wheat which could feed the starving millions.  Russia has said that it is willing to release the wheat, but the sanctions must be removed first.  Russia would also 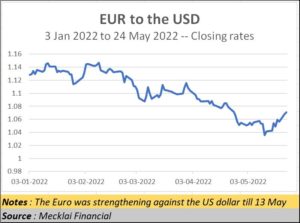 want the old agreement, of not letting NATO expand eastwards, revived, and implemented.

Meanwhile, Germany has seen its inflation peak to levels not imagined a year ago.  France has survived, for now, because it depends more on nuclear energy, rather than gas. But the EU as an entire bloc is vulnerable.  That is evident from the way the Euro has weakened.  One Euro was worth 1.14 dollars or more in January.  By 12 May it tumbled to 1.04 and is now trying to recover.  More EU countries are beginning to become restive, and cracks are beginning to show.  The coming months could be interesting, because if a pact cannot be settled with Russia, the EU may have to pay more for oil and gas when winter begins.  Germany could be hurt the most.

What does all this mean for India? First, with the banning of steel 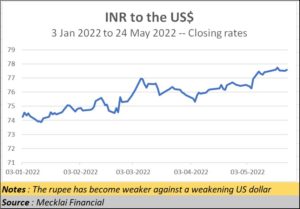 and wheat exports, it has ensured that Indians will be spared further price increases.  But that will mean lower exports, and hence a bigger balance e of trade   This could be made worse by more expensive imports – though, thankfully, the government has managed to strike a deal with Russia for discounted pricing of oil imports from there.

The combined pressure of inflation and a widening trade balance will mean a further weakening of the rupee – it has been falling against the dollar, which is also a lot weaker than it appears to be. 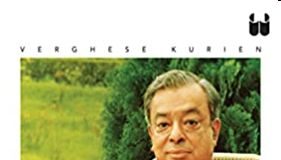 https://www.freepressjournal.in/analysis/policy-watch-farmers-need-msp-till-commodity-markets-mature-and-become-reliable For desperate farmers, and broken commodity exchanges, MSP is the solution RN Bhaskar Ever since the government backtracked and repealed the three farm laws, there has...