Home Analysis Covid19 — The killing fields that India has become 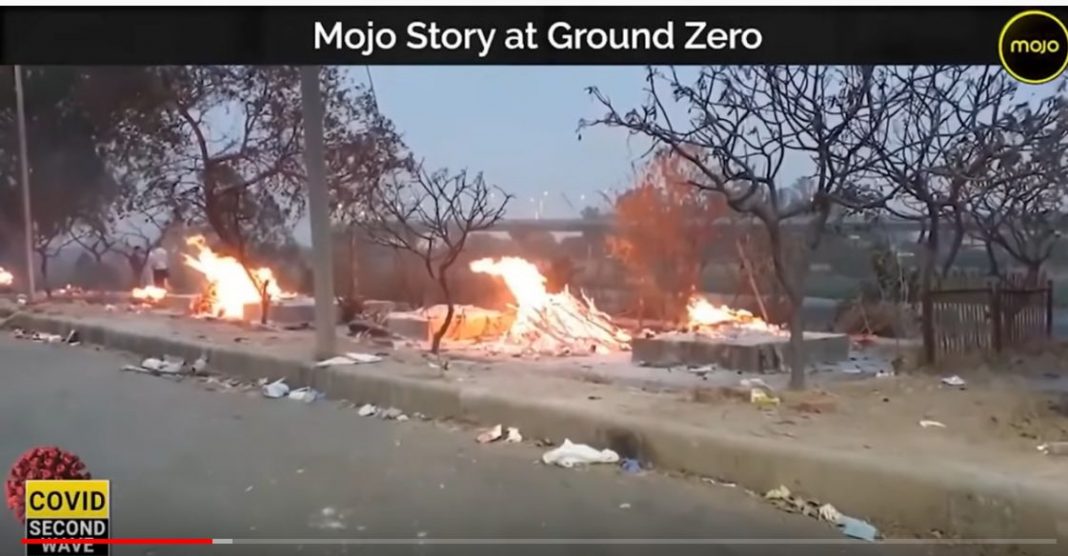 Covid19 — Who lit pyres on the killing fields?

One has only to see the long queues of people standing outside hospitals.  Then one sees the numbers of people who have collapsed by the sidewalks.  And then you learn that they have collapsed because neither could they get beds in the hospitals nor access to oxygen to ease their breathing.  All were victims of a ham-handed government policy on the Covid front. These are the new killing fields of India. You are then exposed to the lineup of corpses outside crematoriums.  The worst hit are those in Uttar Pradesh (UP), the state from which Narendra Modi, the prime minister, has chosen to get elected. The lineup is so long, that the managers have been left with no option but to issue token numbers.  “Don’t crowd around, says the manager.  Come when your number is called.  And when will that be?  He has no answer.  And when photographers published photographs of the bodies lying around, the first reaction of the state was to erect barricades so that no pix could be taken.  Out of sight is out of mind, right?

You can see pyres burning all along the ghats – the concreted platforms along the major rivers – Ganga and the Yamuna. And if you want to know how bad the situation is, just view the video at https://www.youtube.com/watch?v=3sq8j1q8j6A.  The flames, the lineup of corpses, and the wailing of crowds leave any observer with the taste of ashes in the mouth.  In the state of Karnataka, the government found it had run out of space in graveyards and crematoriums and advised its people to cremate or busy the bodies anywhere, even in their backyards (https://www.deccanherald.com/state/top-karnataka-stories/karnataka-permits-cremation-burial-of-covid-19-victims-on-land-or-farmhouses-owned-by-their-families-976938.html).

Free Press Journal knew that this would happen – on 8 April this year (https://www.freepressjournal.in/analysis/a-shrinking-middle-class-could-roil-india-badly), it was among the first to warn the government that if the Election Commission(EC)  did not immediately stop the milling of crowds without masks or social distancing, there would be hell to pay.  Both the PM and the EC blithely ignored the warnings. Instead, the ruling party kept on calling for more rallies, each with thousands of people converging without masks, without social distancing.  This was topped by the Kumbh Mela, where millions gathered to take a dip in the holy Ganges.  Expect the numbers in UP to be higher than anywhere in India.

As Business Standard was to put it on 13 April, (https://wap.business-standard.com/article/economy-policy/india-s-covid-crisis-stems-from-arrogance-hyper-nationalism-incompetence-121041300113_1.html ), India’s Covid crisis stems from arrogance, hyper-nationalism, incompetence.

Soon thereafter, The Economist also stated, quite bluntly, in its issue dated 24 April 2021, that “A second wave was inevitable, the government’s failures were not.”

And then listen to what the Israeli newspaper Haaretz had to say (https://www.haaretz.com/world-news/how-modi-led-india-into-a-covid-catastrophe-1.9744273) – “Narendra Modi’s attempts to censor the news and massage death rates can’t hide his failure to prepare India for its disastrous second COVID wave. Indians are dying, and so is the prime minister’s ‘strongman’ image.”

The more one looks at it, the more is one convinced that the government had become too obsessed with the image of the strongman who could lead India.  It forgot to spend on healthcare, the first important thing a country needs after food.  The food was taken care of by previous governments.  Modi just did not bother about healthcare. was better than only one country in the neighbourhood – Pakistan (see chart).  All other neighbouring countries had been investing more on their people – on health and education.  India ignored both, especially under Modi.

Not surprisingly, India’s GDP growth rates kept falling each year for the past six years.  Each year, there was a different excuse.  The fact was that the government had ignored growth. It only talked about such things, even coined fancy phrases for it. Instead, it had promoted censorship, hiding information from its people, and ‘tamashas’.  It called people to beat thalis when the first lockdown was announced.  It asked them to light candles.  It forgot that lives are saved by doctors, and medicines, not by mumbo-jumbo. Where are the doctors?

When it came to doctors, we reminded the government again and again that India had very few doctors.  When the government rolled out — in August 2018 — the high decibel Ayushman Bharat, we urged it to increase the number of medical seats at medical colleges (http://www.freepressjournal.in/analysis/a-great-vision-for-healthcare-if-r-n-bhaskar/1336205).  We said that no mass insurance scheme would work without doctors (http://www.asiaconverge.com/2018/08/ayushman-bharat-great-concept-doctors-overlooked/).

We told the government that the easiest way would be to allow all government colleges to build ten more floors – the patients were there waiting in queues, so the medical students would be able to practice their skills.  We also advised the government that if money was not available, to partner with developers and private hospitals.  We hoped that the government would increase medical seats after it abolished the Medical Council of India.  But no. The government wanted to promote the rapacious promoters of private colleges, which in turn pushes up the cost of medicare, and even reduces the quality of healthcare.

As T Sundararaman, former executive director of National Health Systems Resource Centre informed media  (https://www.downtoearth.org.in/news/health/shift-health-to-concurrent-list-expert-group-to-finance-commission-68926), “We find there is a conflict of interest in the panel as two of the members are directly linked with the private sector. While we strongly oppose the very proposition, we are not surprised at this recommendation because of the composition of the panel.”

Instead, the government tried to fudge figures.  It tried to push for conversion of homeopaths and Ayurveda into allopaths by just doing a bridge course.  We asked that if bridge courses were okay, why not have a bridge course for government clerks and make them IAS officers (http://www.freepressjournal.in/business/budget-2018-the-spirit-is-quite-willing-but-the-flesh-is-terribly-weak/1214090)?

In fact, the government has been reducing expenditure on healthcare, as can be seen from the latest budget figures. Its only concern was Ayurveda, when the patients wanted a proper cure.  Ideology had begun to replace science and sense.  No wonder then, the casualty rate had to go up.  India had learnt to promote its political parties, not its people.

Even when Budget 2021 was presented before the Parliament, Free Press Journal again told the government that without health and

education, the budget was meaningless (https://www.freepressjournal.in/business/policy-watch-budget-2021-is-a-mixed-bag-with-too-many-causes-for-alarm).  But the government was keener on media management and ensuring that the right headlines came out in mainstream media than bother about the upliftment of people.

Today, it is confronted with death everywhere.  There are pyres burning.  Graveyards have run out of land to bury people.  In Mumbai, the church sensibly advised people to cremate their dead and then keep the ashes in urns in a wall where a plaque could be put up.  This did infuriate some Christians who believed that bodies would not rise from the dead.  But the Church preferred to promote sense, and not just ritual. It has been trying to explain the situation to people.

In the face of such sensibility on the part of the church, the government has failed to wean people away from having pyres where wooden logs are burnt on the banks of rivers.  It has failed to recognise that its healthcare systems are among the most pathetic in the world.

There are other areas too where good sense seems to have been abandoned by the government. Even the vaccine promotion policy was full of flaws.  Sputnik, the Russian vaccine, which has one of the best efficacy rates, was denied permission even though the first overtures were made in July/August last year. Dr. Reddy’s Laboratories which had partnered Sputnik was kept on hold.  It is only when the second wave overwhelmed the government that it allowed all state governments to source the vaccines from anywhere.  Earlier, it had only been lambasting opposition states like Kerala and Maharashtra for their poor management of Covid infections.  Now in the face of deaths in Gujarat, UP and elsewhere, it has been trying to find excuses.

It first promoted Astra Zeneca’s Covishield, then decided to promote Covaxin.  It then allowed Serum Institute to demand a financing package for Rs.3,000 crore, and then even higher prices, till the number of deaths alarmed the government.  It has now begun advising Serum Institute to reduce prices.

It tried to promote an ayurvedic concoction as a cure, till a public uproar made it backtrack, and the concoction was allowed to be promoted as an immunity booster.  No third-party independent trials have confirmed its efficacy or its relevance as yet.

It was advised last year, by its own teams that an oxygen shortage was imminent (https://indianexpress.com/article/india/covid-19-oxygen-supply-warning-7285340/).  It chose to ignore that advice. The government was too full of its faith in Modi, and the Prime Minister had little time or need for advice.

India is now paying the price of such foolishness with countless dead-bodies. It now has corpses on its streets.

How many people are dead?  Nobody knows.  But on 21 April, Member of Parliament, Subramaniam Swamy asked the government to clarify the situation.  His inputs showed him a number that was several times larger than the government count (https://twitter.com/Swamy39/status/1384871081169784835?s=20).

Clearly, the government has been caught fudging figures here as well.

Crystal ball gazing into the future

Is anyone listening to Janet Yellen?

The missing dead series – Part III Can India be taught to respect the dead?

The missing dead series – Part II — how did it happen?

Doing business with the dead? Those who do not respect the dead cannot be expected to respect the living either.  And democracy and elections cease...