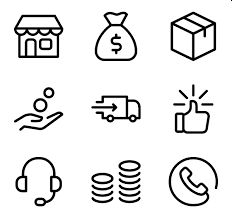 It is when you look at data on asset ownership that you see layers of myths being peeled away.  Slogans fall by the wayside.  Pompous talk about a self-reliant India gets deflated.  And people who tell you that India could become the next super-power in the world could be diagnosed as being afflicted with paranoia.

When a leading publication published information about asset ownership, it demanded closer attention.  Some additional 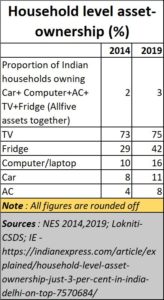 All of them pointed to the same theme – that India had ignored its people.  This was something that was clearly borne out by the study on per capita incomes last week (https://asiaconverge.com/2021/10/global-turbulence-and-india/).

Consider the first table.  Only 3% of India’s households owns all the five assets that determine whether the person is upwardly mobile or not.  The five items that have been considered are car, computer, air conditioner, television, and refrigerator.  Of these one can be debated – the motor car.  Many Indians prefer to use two-wheelers, even as a family vehicle.  But the presence of a car is a clear indicator of rising aspirations, hence its inclusion can be justified.

What is worrying is that for a country that is supposed to be blessed with mobile connectivity, only 16% own computers.  A computer – laptop or desktop – is a key indicator of a student population’s ability to pursue serious study and reference through the internet.  You cannot really do that on mobile phones or tablets. Once again, claims about India marching into the digital age appear a bit hollow.

And this is where the second table sheds some more light on progressive and not so progressive governments.  It is time to look at states, and the kind of asset ownership they have allowed their people. We use the word ‘allow’ with a lot of caution – because without the state’s willingness to let people earn more, or create conditions which promote both employment and unemployability, the individual remains helpless.

The conditions that each state government is responsible for are law and order, creating and promoting good schools, ensuring health,

else the earnings will be frittered away on expensive medicare, creating an environment that industry and entrepreneurs are comfortable with, and the willingness to pay a fair price to farmers, the biggest community in India accounting for over 50% of its population.

And this is where Delhi comes up at the very top.  Its tax rates for businesses, its willingness to keep a sharp look out for law and order violations (notwithstanding the terrible influence of politics which often looms large over the law and order machinery),  and the proximity to the Supreme Court (which has come down heavily on air pollution, noise pollution, power cuts – especially in and around the Delhi region — compelling the executive to take measures to remedy the situation) and its overwhelming number of government employees, have all been great contributors towards the rising wealth of its people. Moreover, Delhi is a city state.  It does not have rural areas; hence the wealth of the city is not averaged out with the meagre earnings of rural folk.

Punjab comes next.  It has a politically alert population which is ready to rise in protest against any perceived injustice.  The presence of a large Sikh population also helps.  Do remember it is the only community (other than the Parsees) which does not allow even a single member of its community to go out and beg. Political astuteness and belligerence have also helped it wrest some of the most favourable terms for its agricultural produce (https://www.moneylife.in/article/who-is-responsible-for-keeping-farmers-in-bihar-and-uttar-pradesh-poor/64639.html) .

But for these two states (and possibly Nagaland and J&K where it may be necessary to ignore ownership of air conditioners), the rest of India’s states have not been fair to their people.  They have not promoted education, healthcare, wealth generation, and employment opportunities to the extent a vibrant state requires. A lot more needs to be done by them to get their people prosper.

In some ways, the most worrisome states remain Uttar Pradesh, Bihar, and Madhya Pradesh.  These three states which form the Hindi belt, and which are also crucial for any political party that wants to head the government at the centre, have let down their people terribly.  These are also highly populous states.  Ironically, all three states like to claim that they are upwardly mobile.  At times, India’s premier think tank, Niti Aayog too choruses the chants of Halleluiah.

But quite often the growth is illusory, often propped by central government largesse (https://asiaconverge.com/2021/08/the-fanciful-figures-of-uttar-pradesh/).  Sometimes these grants could be for Namami Gange, at times for Mathura and recently for Kushinagar which is also one of the poorest districts in UP (https://indianexpress.com/article/explained/kushinagar-airport-inauguration-uttar-pradesh-buddhism-poverty-explained-7581166/).  These are the states that perform terribly on several other indices including those that measure education and  life expectancy (https://asiaconverge.com/2021/07/hindi-belt-1-saga-of-death-poverty-poor-governance/).

Some of the biggest crimes against children and child girl trafficking can be found in these states (https://asiaconverge.com/2021/07/hindi-belt-ii-crimes-against-children-and-against-humanity/).  Unfortunately, neither the central government nor the state government appears to be willing to give this problem a close look.  It could stir a hornet’s nest, going by what happened in the Muzaffarpur case involving a child shelter run and managed by a local politician.  More detail about poverty in India can be got from the RBI’s notes (https://www.rbi.org.in/scripts/PublicationsView.aspx?id=18810). 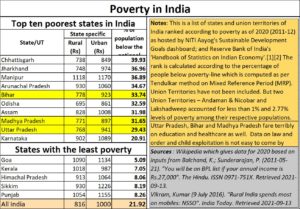 In fact, if you look at poverty indicators, you will find the three states among the poorest in the country (see table).

Also included are the hilly states of Chhattisgarh and Jharkhand.  Tribal ownership of land appears to be the primary cause for poverty here (https://asiaconverge.com/2010/06/howjanno-devi-and-others-transformed-jharkhand/).  Can the state government create a fund which purchases land from tribals at market rates and sells them back to tribals at market rates? During the interim, landless labourers can till the land sold to this tribal land body, so that it is put to productive use. It is imperative that tribals are not exploited because of laws of land reservation, the way they are structured today.

Such a method would ensure that tribal land (or any other reservation land – Sikkimese, Himachal Pradesh and Sikkimese lands for instance) is not sold to non-tribals.  Yet tribals can get a market price for their land, yet ensure that the land is retained by the new entity formed to pool such ‘sold’ land and give it to landless workers for farming or any other economic activity.  Repurchase of land from this entity can only be done by tribals.  This way, a wealthy tribal does not exploit poorer tribals by purchasing their land at distress values.

It could go a long way in solving the problem of Naxalism on the one hand (tribal lands and Naxalism almost overlap each other) and tribal poverty and exploitation on the other.

And this takes us to the last worrying issue. They point to the crippling apathy shown by successive governments to farmer

penury (https://asiaconverge.com/2020/12/farmer-agitations-fueled-by-corruption-politics-and-power/). Survey after survey has shown that the small armer earns little from cultivation.  He augments his household income with daily wages by working on other jobs.  This situation must end.

Unfortunately, the three farm laws mooted by the government do not address this situation.  One way out would be to allow him to lease out his land to people willing to till it for him.  This way, the farmer continues to own his land, which he is emotionally and culturally bound to. He gets a steady income from rentals and from daily wages.  And once he has the expertise and the cash, he will go back to farming with new technologies like hydroponics which can increase his cultivable area ten-fold (https://asiaconverge.com/2020/12/farmer-agitations-fueled-by-corruption-politics-and-power/).  The government needs to look into this as well.

The asset ownership table throws up other disturbing information. Besides villages showing no increase in asset ownership between 2014 and 2019, towns were marginal beneficiaries, while cities benefitted the most.

Villages suffered most. They are dominated by farming hands.  They need to generate more money – either by getting better prices for milk, or sugarcane, or by ensuring that irrigation reaches them.  Technologies and financial packages designed to make them grow need to be looked at very carefully.

You cannot have a prosperous India if so many of its constituents are driven into poverty, as the Pew research findings have shown (https://asiaconverge.com/2021/05/quest-for-poverty-alleviation/).  India has protected its rich, but has damned its poor.

The poor need to be taught how to become wealth generators.  It must begin with better schools, better medicare and better agricultural prices.  India should start from here.

In easing agri-markets and movement of produce, Nirmala Sitharaman has reiterated...

https://www.firstpost.com/business/in-easing-agri-markets-and-movement-of-produce-nirmala-sitharaman-has-reiterated-earlier-promises-here-are-seven-more-urgently-needed-reforms-8374021.html Atma Nirbhar - Agri-markets: A promise here and a promise there, with little in between RN Bhaskar – 16 May 2020 In terms of outlay, it...