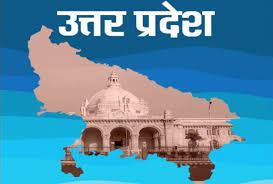 Uttar Pradesh and the numbers it conjures up

When prime minister Narendra Modi described the Covid management of Uttar Pradesh (UP) as “commendable”, or even “unprecedented”, it made even the most neutral of economy

watchers squirm uncomfortably.  The same feeling overwhelmed many when the government stated in Parliament that there were no “oxygen” deaths.

Something bizarre is happening, and nowhere does it become more evident than in UP.  It is the largest of India’s states. This is the state from which mot prime ministers of India have stood for elections.

It is the most populous.  The most poverty-stricken.  And one of the most illiterate. More on this a bit later.

But more importantly, it has adopted the stance of dishing out numbers which have little to do with reality.

Take the Covid management first.  The reason why UP has managed to few Covid deaths is because it just did not bother to res9ster them, just in the same way as it did not even bother to register Covid infection (https://twitter.com/andymukherjee70/status/1383233764235517954?s=20).  If the register isn’t there, the record does not exist, right?

And it appears that the Union government has learnt this lesson from UP.  It claimed that there were no deaths on account of oxygen shortage. There were no oxygen deaths because no medical certificate recorded the death as Oxygen deaths.  In fact, no doctor in his right senses would ever issue a medical certificate stating that non availability of oxygen was the cause of death.  He would rather describe it as respiratory failure.  And when it comes to non-availability of ICU beds, the same story.  The same story again when it comes to malnutrition deaths.  The last is classified as death on account of natural causes. Doctors know that if the truth is told, the administration could pile on them like a tonne of bricks.  They might even lose their certificates of practice.

But UP does not even worry about that.  According to the government’s own report (https://censusindia.gov.in/2011-Documents/mccd_Report1/MCCD_Report_2019.pdf )  , only 6.5% of the deaths that are registered in UP are actually certified medically.  The rest of them are merely recorded as deaths.  The cause of death is not given.

The person could have died on account of lack of oxygen, or were victims of murder.  You will not get details.   In fact, the entire Hindi-belt is notorious for this.  And it happens because of many reasons. There are very few doctors. Local collectors and their nominees refuse to give the cause of death. The police are collusive. And there is little to say about the elected representatives.

What is more frightening is that across the country too, only 20% of the registered deaths are medically certified.  The remaining 80% do not have the cause of death noted. Absence of forensic laboratories provides a good excuse.  And the diversion of forensic capability to determine whether meat confiscated belongs to cows makes forensics for humans even more scarce. 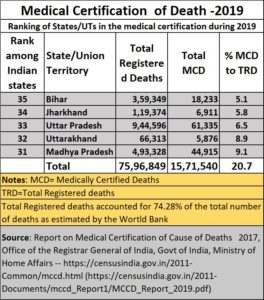 But the most frightening thing about death is that almost 23 lakh deaths each year, in pre-Covid times, go unregistered (https://asiaconverge.com/2021/06/missing-dead-series/).  They are the missing dead. Nobody knows about them.  It is quite possible that their Aadhaar cards, the ration cards, and their pension drawals are still alive.  Just imagine the havoc this would cause to the electoral system.  In five years, you could have 1 crore bogus voters, impersonating the dead.   This number does not include fraudulent voters using bogus Aadhar (and election) cards.

So, when you hear of bodies floating down the Ganges, you know that the numbers of unregistered deaths will be higher this year.  Of course, the state did try to justify this discovery of bodies in the river or along riverbanks by saying that people consider the river sacred, and hence throw the bodies in it.

But wasn’t that the kind of thing Namami Gange was supposed to stop?  So where were the Rs.8,000 crore spent (https://asiaconverge.com/2020/08/government-plunder-productive-states-in-india/)? Honestly, the stories UP can come up with!

What is also extremely important is the role the Election Commission (EC) should be playing. It must send across teams to actually account for the dead and missing and cross them out of the electoral rolls. Else you will have more bogus voting in the coming elections.

Do bear in mind that compared to the Indian government’s official estimate of 414,482 Covid deaths(https://www.mohfw.gov.in/) ,  experts believe that the number could be ten times higher – at 4 million (https://www.bbc.com/news/world-asia-india-57888460). UP’s contribution to this number will be significant, if anecdotal evidence is considered and the brilliant tabulations of Dainik Bhaskar are considered.   It will be the death of democracy if the EC does not move quickly.

But take other numbers that appear to have been churned out by the ubiquitous bureaucrat’s flight of fancy. 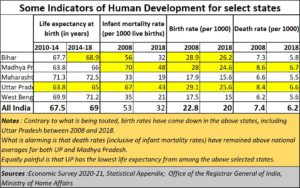 If birth rates are high, it is because (as the first chart shows, towards the bottom), mortality rates for children under five years stand at a whopping 47 per 1000 people, compared to 36 or the entire country.  Poverty rates are extremely high compared to the national average, even though unemployment rates look lower.

That is because UP is a highly exploitative state where farmers are seldom given fair market prices for their produce.  So, they can work and toil.  But they will remain poor.

That is why, when UP boasts of low dropout rates or higher enrolment rates, they are out of sync with low literacy rates.  In any case, India has an absurd way of measuring literacy.  It still uses the definition – anyone who can read or write his or her name – to be classified as literate.  So, if my name is Ram (appropriate for the current season), and I know the three letters, I am literate.  Very charming!

No wonder then, the life expectancy of people in UP is lower than that for the entire country.  And the death rate is higher.  It is a state that is crying out to be liberated, but the prime minister and Niti Aayog are blind to these cries.  They call the state’s performance commendable and exemplary!

Then there are other numbers that baffle. Take the first chart again.  Rural share of food expenditure is almost at the same level as the rest of the country.  How is that possible?  Food expenditure as a percentage of total income goes up when people are poor, and comes down only when there is money for other things.  And also do bear in mind that 77.73% of UP’s population is rural. So, this number does matter immensely.  Thus, you have abject poverty, and the state claiming that its rural share of food expenditure is at the same level as the entire country.  Just unbelievable!

Finally, for the sake of brevity, take one more number.  UP’s GSDP growth is 5.3% — lower than 7% for the country’s GDP growth. But look at the next line.  Per capita income growth is shown at 13%, higher than the national growth at 10%.  So, how did the per capita number increase to levels higher than for the entire country.  Did someone reduce the state’s population to arrive at this number?  Fanciful, indeed.

If UP’s systems are not brought under check, the contagion will spread.  It has already spread to Niti Aayog.  Even the PM appears to have been affected by this. The country definitely needs to be saved.

More doles for the ‘needy’ will only result in more corruption

https://www.moneycontrol.com/news/business/more-doles-for-the-needy-will-only-result-in-more-corruption-3838161.html More doles result in more corruption; NYAY and Ayushman could be the biggest of all scams RN Bhaskar -- 18 April 2019 Doles, freebies and giveaways...