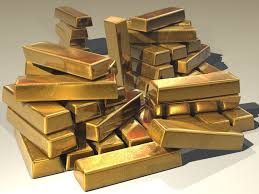 So is it the turn of gold markets now?

Are the G7 countries doing what India describes through an adage? “Vinashakale vipreet buddhi” is a saying which – loosely translated — means “During the time of destruction, man takes leave of his senses”.  Led by the US, the G7 is a grouping of some of the wealthiest countries in the world, comprising (in addition to the US) Canada, France, Germany, Italy, Japan, and the UK. 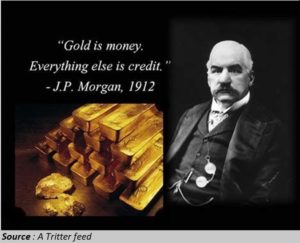 Each time, the US leads the world to the brink of utter destruction, it intones the words “Never again”. It did so after bombing Hiroshima and Nagasaki.  It did this again after the Vietnam war. Then, there was a seeming lull, during which it focussed its attention to Latin America. Then came the father and son Bush presidents, who set the Middle East on fire.  The statement “If you are not with us, you are against us” defied the right of nations to stand aside.  Every country was sought to be made complicit, or in conflict (read more in the Nobel Award speech of Harold Pinter (https://www.nobelprize.org/prizes/literature/2005/pinter/25621-harold-pinter-nobel-lecture-2005/).

The concept of civilisation was forgotten (the Sumerian clay tablet libraries were blown to smithereens). The value for human life was cast aside (Lancet’s surveys suggested over 600,000 deaths (https://www.washingtonpost.com/wp-dyn/content/article/2006/10/10/AR2006101001442.html). The oath to defend truth was abjured as it invented lies which were sought to be passed off as truth – the charge of weapons of mass destruction (WMDs) became a joke (https://asiaconverge.com/2022/02/ukraine-the-war-that-usa-wants/) ; and the senate hearings on Princess Nayirah (https://www.youtube.com/watch?v=wEGUWCmQ8Qk) a shameful expose of the extent to which the US would stoop. The Nayirah case is, incidentally, a rare exposure of the many lies governments have resorted to.

The gods and the G7*

The G7 is going mad. This is now being played out by instigating more bloodshed in the Russia-NATO-Ukraine conflict.  It could easily result into a third world war where there will be no winners, and almost no survivors. The US could well become the wild laughing hyena symbol for a bombed-out world.

These columns have already talked about how badly the US wanted this war (https://asiaconverge.com/2022/02/ukraine-the-war-that-usa-wants/).  They have talked about the bloodied history of the US in toppling governments and instigating regime change in more than dozens of countries.  And they have talked of how by escalating the conflict with Russia, the  US is left weakened, and Europe left maimed. Russia has emerged stronger (https://asiaconverge.com/2022/06/russia-india-china-should-work-together/).  This is despite the US instigated sanctions against Russia, seeking to throw it out of the global monetary system by denying it access to the inter-banking platform known as SWIFT.  It then tried to show that Russia had become a defaulter in repaying its loads even though the money was ready, but the banks were forbidden to allow any transactions with Russia.

Nobel award winning economist, Joseph Stiglitz put it quite succinctly, when he said (https://www.irishexaminer.com/opinion/commentanalysis/arid-40898999.html)  “Of course, America does not want to be dethroned. But it is simply inevitable that China will outstrip the US economically, regardless of what official indicator one uses. Not only is its population four times larger than America’s but its economy also has been growing three times faster for many years (indeed, it already surpassed the US in purchasing-power-parity terms back in 2015). While China has not done anything to declare itself as a strategic threat to America, the writing is on the wall.” 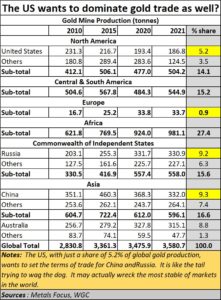 But now the joke has become even more macabre.  Last week  (https://www.euronews.com/2022/06/26/g-7-leaders-to-announce-ban-on-russian-gold-imports-in-latest-sanctions-against-kremlin), the US let it be known that “Leaders of G7 countries plan to announce a ban on gold imports from Russia — the latest in a series of sanctions the club hopes will further hit Russia’s economy over its invasion of Ukraine.”

This is laughable.  It is like the tail wagging the dog. The chart tells you why.  The US (and Canada) produces only 5.2 percentage of gold annually.  Europe (including the UK) produces 0.9%.  Yet G7 wants to control Russia which produces 9.2 %?  And implicitly, the ban would also try to control China which produces 9.3 % annually (full datasets of all the charts in this article can be downloaded from the links given at the bottom of this article).

The gold must love the G7 very much because this is the clear indication that it is going mad.

First, unlike SWIFT which is controlled by the US, gold isn’t.  It is the one medium of exchange that has survived millennia, without any single country being able to control either its price or its supply for any significant length of time.  Tyrants have tried to ban trade in gold coins – like the Romans, who discovered that Indian traders had bankrupted their exchequers through selling them silks (from China), spices and perfumes, and swiftly converted their coins into base metals (https://www.newworldencyclopedia.org/entry/Roman_trade_with_India).  The ban on trade just did not work. The G7 wants to rewrite history? Wot? 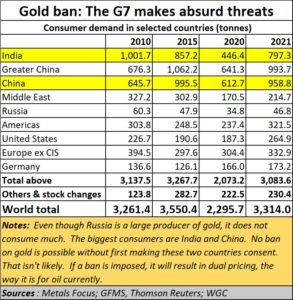 There is a second problem.  The US does not even control consumption markets.  The biggest consumers of gold continue to be China and India.  If the ban were to be introduced, you can be sure that traders in these countries will buy Russian gold, melt it, and let their domestic markets use the gold, either in the form of ingots, coins, or bars or as jewellery. Once it is melted, the origins of gold cannot be traced.

That is why, countries through centuries have put their faith in gold.  And that is what made JP Morgan declare that only gold is money and everything else (even the US dollar) is credit, or a derivative.

Of course, the US could (foolishly) try doing this by asking the licensed gold refineries – LBMA, PAMP and Comex and a host of others – not to certify gold where the source of the metal is suspect. In doing so it would be trying to emulate the much maligned Kimberly Process (https://asiaconverge.com/2011/05/what-you-didnt-know-about-de-beers-and-diamonds/) that the De Beers conglomerate tried to introduce for diamonds (also read http://asiaconverge.com/wp-content/uploads/2015/12/2015-02-05_Govt_Book_4-2-15_Low_Res.pdf).  The Kimberley process hasn’t worked.  And there is no reason the G7 will succeed if it decides to try this by arm-twisting gold certifiers.

The US should learn from what happened with oil – when it tried to sanction oil exports from Russia.  Oil prices peaked and threatened to cross $200 a barrel (https://asiaconverge.com/2022/05/oil-could-climb-to-over-200-a-barrel/).  What happened next was even more interesting.  The US had ambitious plans of making handsome profits from this surge in oil prices (almost all the Middle East oil and gas exploration companies have US companies as equity partners).  But then Russia began selling its oil to friendly countries at a discount so that the prices would remain at pre-surge levels.  China and India became large purchasers of this discounted oil, demand for oil from the US and the Middle East began to taper off, and oil prices have begun to ease.  Russia is richer today than before the clash with Ukraine (https://asiaconverge.com/2022/06/russia-india-china-should-work-together/) .

And now the G7 wants a cap on oil prices as well.  How hilarious!

The G7 could end up causing a surge in gold prices, with Russia selling gold at pre-surge prices to friendly consumers – especially China and India.  The G7 is sore because gold is the second largest revenue earner for Russia (after oil).  So, it invokes the green-eyed monster – destroy what I cannot get, but still covet.  After wrecking the banking industry, the G7 could be wrecking the gold industry as well.

The fact that countries have continued to repose their faith in gold is evident from the way they have been shoring up their gold reserves.  Except for some players like the US and Germany, which already had too much of gold as a percentage of their reserves – almost all countries, including India, have been stocking gold (https://asiaconverge.com/2020/01/india-confused-about-gold/).  They know that in times when no currency is strong, and the US stomps over everything in disdain, gold remains more dependable than the dollar.

In the meantime, in addition to China, Russia and other countries creating a new banking exchange (like the SWIFT),

China has begun shoring up its own highlights efforts to loosen US dollar hegemony. As the South China Morning Post put it, “China’s plan to establish a yuan pooling scheme with the Bank for International Settlements (BIS), plus Indonesia, Malaysia, Hong Kong, Singapore, and Chile could pave the way for the currency to play an anchoring role in the Asia-Pacific region, analysts said.”   It goes on to add that “The Renminbi Liquidity Arrangement, which could be used in periods of market volatility in the future, initially includes the People’s Bank of China (PBOC), the Bank Indonesia, the Central Bank of Malaysia, the Hong Kong Monetary Authority, the Monetary Authority of Singapore, and the Central Bank of Chile. Each participant will contribute a minimum of 15 billion yuan (US$2.2 billion) or the equivalent in US dollars, creating a reserve pool at the BIS, according to a statement from the Switzerland-based financial institution owned by central banks (https://www.scmp.com/economy/china-economy/article/3183242/chinas-yuan-liquidity-reserve-pool-highlights-efforts-loosen). The days when the US could make the currency markets jump may be ending.  This is despite the fact that the G7 appears to have finally decided to go ahead with the ban on Russian gold (https://www.occrp.org/en/daily/16513-g7-imposes-a-gold-ban-against-russia).

Ironically, there was a time the US wanted free markets.  Today it does not want them.  Now as the US tries to work through the G7, it is possible that the BRICS could have new members and become a counter to the G7 (https://currentaffairs.adda247.com/iran-argentina-applies-to-join-china-and-russia-in-brics-club/).Iran and Argentina have just applied for membership.  So, you will soon have NATO vs ASEAN, G7 vs BRICS.  More such groupings — which fragment the world — will soon emerge.

As for the gold ban — The response of the markets to the G7 could well be “dream on”.

Note: * = The lines allude to the saying “Whom the gods would destroy they first make mad”, sometimes given in Latin as Quos Deus vult perdere, prius dementat (literally: Those whom God wishes to destroy, he first deprives of reason) or Quem Iuppiter vult perdere, dementat prius (literally: Those whom Jupiter wishes to destroy, he first deprives of reason).   It was first used by Reverend William Anderson Scott’s book Daniel, a Model for Young Men and it later appears in Henry Wadsworth Longfellow’s poem “The Masque of Pandora”.  More details can be found at https://en.wikipedia.org/wiki/Whom_the_gods_would_destroy