Home Analysis Taxing the poor and making them poorer 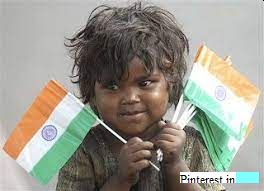 Making the poor even poorer

On Independence Day came the news that the finance minister planned to soon review the exemption-free new tax regime with a view to making it more attractive for individual income taxpayers, sources said. Eventually, sources said, the government aims to establish 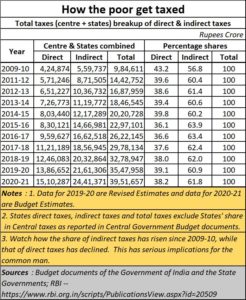 a system where there are no exemptions and the complex old tax regime with exemptions and deductions is terminated (https://www.deccanherald.com/business/business-news/finance-minister-plans-to-review-exemption-free-tax-regime-to-make-it-more-attractive-1136231.html).

Like all pronouncements, this seems to be a good idea. But experience shows that it may not be such a wonderful move for the average person.  Removing all exemptions – for senior citizens, for the handicapped, for foreign exchange earners — could mean that the common man and especially the poor might get poorer.

To understand this, just look at the table alongside (a fuller version of this table can be downloaded from here). As RBI data shows (https://www.rbi.org.in/scripts/PublicationsView.aspx?id=20509), the share of direct taxes has been going down since 2009-10. In that year, direct taxes accounted for 43.2% of the tax basket, and indirect taxes 56.8%. Burt since then, successive governments opted to rely more on indirect taxes making them account for almost 62% of all taxes. This could be because governments have found collecting indirect taxes much easier.  They spare nobody. This is quite unlike direct taxes where industry demands concessions, farmers (including rich farmers) get a 100% tax exemption. And many politicians escape taxes by showing their income as agricultural income – including a powerful minister who is alleged to have shown his incomes coming from his terrace garden.

Indirect taxes hurt the poor.  They must pay taxes even on the matchbox or the oil that they need and must be managed within the meagre funds they have.  Such indirect taxes don’t worry the rich. 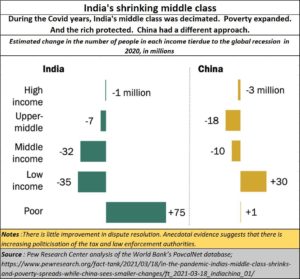 But when the rich get exempted from direct taxes, the burden invariably falls on the poor to make up for the money that the government needs.  To be fair, it must be mentioned that prior to the 1990s, the tax burden was even more distorted, because almost 80% of the tax burden was picked up by indirect taxes.  Sensibly, thereafter, sanity started dawning and the share of direct taxes was increased.  But this is being reversed again.

The share of indirect taxes could go up further because the latest set of GST rules imposes tax even on milk and daily needs. The share of such taxes could thus increase further.  Further, the government has exempted non-packed agricultural produce, thus encouraging the unorganised sector over the organised.

India’s poor track record on protecting the poor is by now quite well documented.  The apathy was noticeable when Covid struck India.  Unlike China, which was ready to rein in its wealthy and introduced measures to protect the poor and the middle-class populations, India did quite the reverse.  It protected the rich, and allowed the middle class to shrink, and the poor to get decimated.

This has also been true of the way the government has treated the MSME sector.  Despite big talk about protecting and encouraging the MSME sector, the government has failed to understand some of the key issues that continue to hurt it.  For instance, even today, an MSME cannot promote its business in another state (in addition to the state in which it is registered) without suffering heavy losses.  An MSME must register itself in each state it wants to do business in. 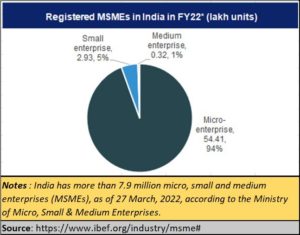 Such a law is not so irksome for large enterprises which have a branch office in each state.  But for MSMEs the cost of going to another state, registering there as well, then dealing with compliances in one additional state is terribly bothersome and expensive.  In an age of computers, why cannot the registration get extended automatically to all states.  That will allow MSMEs to get its GST set-off whenever its people stay in another state or do business there. The talk of ease of doing business does not deal with ground realities. GST is not yet the one tax for one country (https://www.freepressjournal.in/interviews/one-nation-one-tax-tangled-in-complexity).

This is in spite of the fact that MSMEs employ over 80% of the workforce in the country.

It is not surprising, therefore, that India is home to the biggest inequalities in the world. Just look at the way the top 1% earns 20 times more than the bottom 50%, and has 295 times the wealth. The government talks about protecting women, but India still has a female labour share of just 18% of the population.  And the manner in which the government has maintained silence on the release of the Bilkis Bano tormentors in spite of gang rape and mass murder charges, does speak volumes (https://indianexpress.com/article/opinion/columns/justice-bilkis-bano-question-should-haunt-indian-republic-8097740/).

As the World Inequality Report puts it, “The average national income of the Indian adult 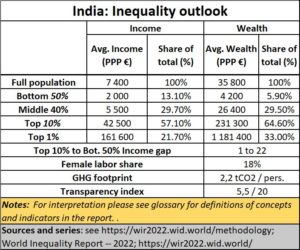 D Subbarao former RBI governor did not mince his words at a recent event organised by the Federation of Telangana Chamber of Commerce and Industry on “India @75- Marching Towards USD 5 Trillion Economy” (https://wap.business-standard.com/article/economy-policy/india-5-trn-economy-by-fy29-only-if-it-grows-at-9-for-5-yrs-ex-rbi-guv-122081500912_1.html).  He said that India $5-trn economy by FY29 only if it grows at 9% for 5 years.

He said, “I see eight key challenges for India to overcome to achieve the dream of USD five trillion economy,” He explained that the challenges are increasing investment, improving productivity and education and health outcomes, creating jobs, raising agriculture productivity, maintaining macroeconomic stability, managing global mega trends, and improving governance.  The government has been found wanting on all of them.

That partly explains why much of India remains poor. If India wanted to stop power subsidies and discom losses, all that was needed was to authorise the RBI to debit those dues to funds apportioned to the states.  That would have prevented politicians from giving subsidies without paying power generation and distribution companies. Instead, the government came up with schemes like UDAY (https://asiaconverge.com/2017/04/uday-and-politics-of-appeasement-and-largesse/) and PRAAPTI (https://asiaconverge.com/2018/06/praapti-transparency-tokenism-decide/) which only window dressed the situation and let the malaise spread. 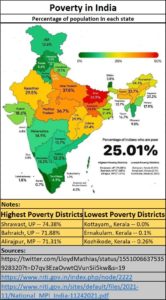 The government could have reduced the expenditure of the Food Corporation of India (FCI) if only it had introduced market-based reforms instead of the three agricultural bills (https://asiaconverge.com/2021/09/need-sensible-laws-to-stop-farmer-exploitation/) that it sought to ram down the states, without even a consultation.

Moreover, even though the government talks about reducing subsidies, it overlooks the way it actually allowed subsidies to be given to the milk industry even after Verghese Kurien showed how to nurture this industry without subsidies, and without government assistance.  What the government is doing now is to cripple the most successful agricultural model (https://asiaconverge.com/2021/11/remembering-kurien-and-how-much-the-country-owes-to-him/) for sustainability and farmer welfare that this country has ever seen.

It is this unwillingness to introduce the right measures on the one hand, and being quick to blame the entire opposition and even the people of India for not being responsible, that has left India a poor country which sees government taxes swell by 41% a year, even while GDP grows at a snail’s pace.

The most successful states are lampooned and criticised, even while holding up the most exploitative states as paragons of virtue and development (https://asiaconverge.com/2022/02/the-double-engine-growth-for-uttar-pradesh-must-not-spread-over-india/).

There is a lot that Indian can do to become economically strong.   But it must be done with political will, and discussion.  The temptation to try ram down policies without discussion, or to preach for hours on the good that the government is doing (but the others aren’t) need to be curbed.

Eventually, there is no denying that without good school education, healthcare and employment, all talk are just dreams. Nothing more.

From investment outlay to farmers’ welfare: Five mistakes one must avoid...