Home Policy Watch The recession will hurt us all 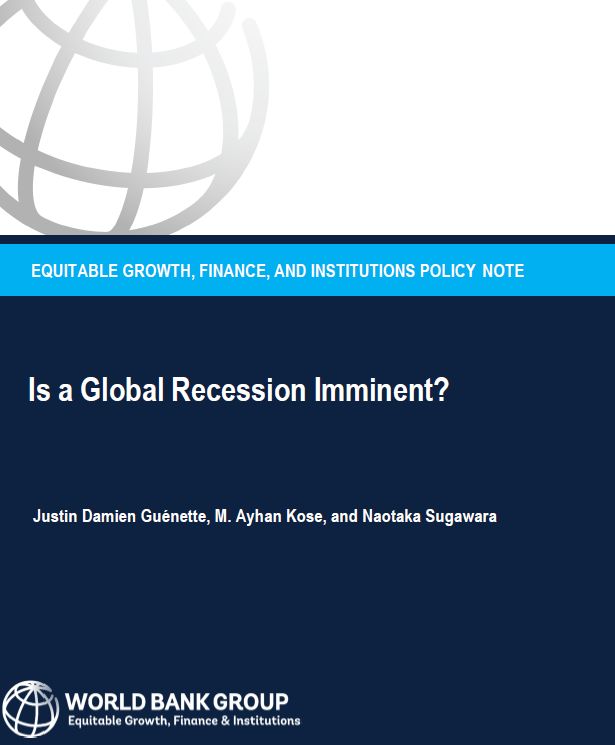 Can India buck the recession?

Notwithstanding the pitfalls of forecasting anything these days, my cracked and worn crystal ball sees a global recession occurring in the next year…. Collectively, Europe, the US, and China make up about half of world GDP on a purchasing-power-parity basis. With no other economy able to fill the void, I am afraid a global recession does indeed appear inevitable.

The Indian government appears to be in a state of denial.  Each meeting with finance ministry officials ends with a statement which says that there is nothing to worry about; that India is in a better shape than many other developing countries. 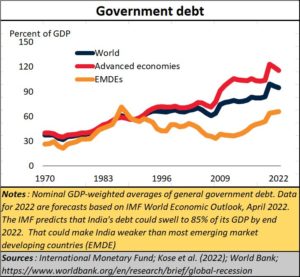 The song is a familiar one. The government also said that demonetisation would leave the country vibrant.  That GST would revive the country’s animal spirits.  Then there was the statement that FDI would come rushing into India because there was nowhere else for money to go.  Indians may have been taken in by the siren songs.  But savvy investors gave India a miss, by and large.  Finance ministry officials are now trying to woo Indians.  But after driving 35,000 NRIs out of India.  After witnessing 1.6 lakh Indians surrender their passports last year (https://asiaconverge.com/2022/07/major-financial-turbulence-ahead-inr-may-weaken-further/).  Remember the statements that the rupee would not weaken?

Over the past six months, each month challenges the government prediction of a robust GDP growth.  Each projection of a GDP growth rate has been revised downward in each succeeding month.

The latest forecasts are grim.  In the first week of October 2022, the  WTO (World Trade Organisation) revised downwards trade growth at just 1% (https://www.business-standard.com/article/economy-policy/wto-slashes-global-trade-forecast-for-2023-to-1-as-recession-looms-122100500781_1.html). In the same week, there were indications that India’s GDP growth in the second half of the financial year would drop below 4 per cent, “which is where it was in the year before the pandemic.” (https://www.business-standard.com/article/opinion/unmistakable-slowdown-some-indicators-disappoint-some-flatter-to-deceive-122100700937_1.html?1665168593).

And last week came the news about the IMF expecting India’s debt to increase to 84% of its GDP by end 2022 (https://www.ptinews.com/news/business/indias-debt-ratio-projected-to-be-84-per-cent-of-its-gdp-imf/433313.html).  That would make India stand out among all the EMDEs. 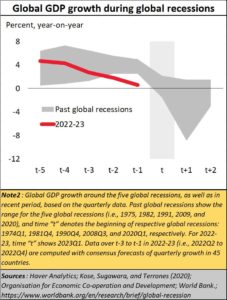 If all these dire predictions turn out to be true, it could mean that India will perform more badly than other developing countries.

Some may still argue that this decline is part of the global recession that is taking place.  Yes, the recession is expected to be round the corner. And when it does hit the world, GDP growth could easily slip into negative territory.

Figures compiled by a World Bank EFI (Equitable growth, Finance & Institutions) note on “Is a Global Recession Imminent?” suggests that if past patterns are anything to go by, a recession spread out to cover two years may see global GDP slip to as low as -8%.

Consequently, India could be more severely hit than many imagine or are told by the government.

The signs of decline were visible quite a while ago to anyone who could see.  GDP growth rates have been falling year after year for the past eight years (https://asiaconverge.com/2022/07/financial-realities-demand-fdi-urgently/). Countries like Bangladesh were overtaking India in terms of per capita income (https://asiaconverge.com/2022/05/bangladesh-trounces-india/). It pays to control fundamentalism, and keep the country together is what Bangladesh seems to have demonstrated. The rupee has been falling — these columns  predicted that the rupee would continue growing weaker (https://asiaconverge.com/2022/07/major-financial-turbulence-ahead-inr-may-weaken-further/) unless the government took appropriate steps to revive the economy, starting with the rural sectors.

These columns anticipated a fall in export revenues and an increate in import costs, thanks to the fall in rupee value alone.  Recession will make exports more difficult.  Expect the trade deficit to keep increasing. Instead of building trade treaties with all the Asian countries, India lost precious diplomatic time in wooing the UK. Globally, most countries have larger volumes of trade with neighbouring countries (https://asiaconverge.com/2021/12/india-china-the-long-view/) than with far flung territories.  Not India. 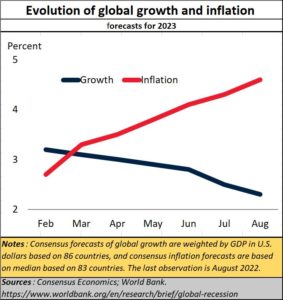 The biggest benefit India enjoys – of a vibrant demography – has been allowed to be frittered away (https://asiaconverge.com/2022/10/india-contaminates-its-demography/).  Unemployment is high. India has been ignoring education and employability, in favour of shrill cries that seek to divide communities (https://asiaconverge.com/2022/05/india-wont-prosper-till-education-and-employability-improve/).  In agriculture, the government hurt agriculture in three ways.  First, it hurt the milk industry with its cattle slaughter ban without providing farmers compensation for the cattle they could not sell. It then began hitting grain growers by fiddling with trading mechanisms which allowed for the discovery of prices (https://asiaconverge.com/2022/10/the-folly-of-banning-futures-trading-in-commodities/). It also allowed import of edible oil, instead of giving farmers higher support prices. The government took more pride in soaring tax collections, forgetting the basic flaw —  when governments earn faster than its people, a recession becomes more inevitable (https://asiaconverge.com/2022/09/india-deceptive-economic-performance/).

India needs to pull itself by the bootstraps and begin working on immediate solutions.

First, focus on nurturing relationships with Russia and China (https://asiaconverge.com/2022/06/russia-india-china-should-work-together/).  Together, and with carefully structured trade agreements, these three countries can shift the centre of gravity towards the east, and become immune to global recessionary trends.

On the agricultural front, revive the milk industry.  It has the potential to increase the purchasing power of the rural sector, which accounts for over half of India population.  That could result in more votes, but also a more vibrant purchasing power, which could translate into a revival of the Indian economy (https://asiaconverge.com/2022/08/rural-markets-will-decide-indias-revival/).

The trick to combat inflation and recession lies in increasing productivity.  This is well brought out by the World bank in its study mentioned earlier. If growth declines, inflation is bound to rise. The ban on cattle slaughter, demonetisation, a poorly structured GST regime which hurts small units and individual self-employed people have stymied growth.  Reduced rural purchasing power has resulted in lower demand for goods from factories, paving the way to a slowdown.

These trends need to be reversed urgently. India’s planners need to realise the need to reduce compliances, and corruption at lower levels of governments.  A reduction in debt will inevitably result in higher sovereign debt ratings, which in turn will make India attractive for foreign capital (https://asiaconverge.com/2022/07/major-financial-turbulence-ahead-inr-may-weaken-further/). Focus more on foreign direct investment (FDI), and not just portfolio investment (FPI). 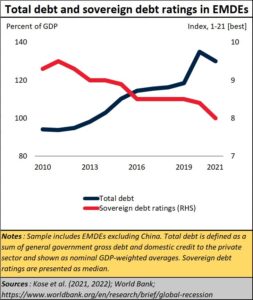 As the country warms up to FDI, debt levels will begin to taper off.  It must resist the temptation of granting subsidies which cripple farmers (https://asiaconverge.com/2022/08/taxing-the-poor-and-making-them-poorer/). Without this self-control, India’s productivity levels will remain low and uncompetitive.  Focus on expanding the middle class – through quality education and healthcare, and you will see India’s sovereign ratings go up.

The west does not have a solution to the world.  Look at how Russia’s economy has shrugged off recession, and is actually booming, while western economies are not (https://www.economist.com/finance-and-economics/2022/10/11/as-europe-falls-into-recession-russia-climbs-out).  India can certainly do better than what it has been doing lately.

The recession that grips the world can be both savage and severe.  The countries likely to be singed badly are the US, the EU (France may escape because of its reliance on nuclear power), the UK.  Ukraine is likely to become a country which chose to do what the US asked it to, and got ravaged in the process. Russia has thrived.  China and India can also thrive it they rework their plans and work together along with Russia.  The complementariness is huge.

But India must also get its act together, focussing on the areas defined above.  If it does, it will have a miraculous story to tell.  Else it will have empty platitudes being sung by the faithful and the chorus choir. India must reduce poverty, expand its middle class.  That can happen if the country has a unified vision, not a fragmented one, as is the case currently.

Agenda for the government – #1. Don’t meddle with the dairy...